SK Innovation to shift its focus to non-oil fields

SK Innovation to shift its focus to non-oil fields 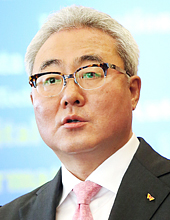 SK Innovation, Korea’s leading oil refiner, will shift its focus to non-oil businesses - batteries and chemicals - in an effort to stay afloat and sustain growth.

“Right now, oil business takes up about 50 percent [of SK Innovation’s profit],” said Kim Jun, president and chief executive officer of SK Innovation, on Tuesday at a meeting with reporters at company headquarters in Seoul. “But by 2020, we will expand the share of non-oil businesses to as much as 70 percent.”

The CEO said that the shift in focus is a must for various reasons, including the global oil price that has plummeted in an ongoing tug-of-war between OPEC and shale businesses. “The price of petroleum [in terms of Dubai Crude Oil] will not be able to surpass $60 for a while,” Kim said.

The move reflects the vast potential of the battery industry. According to company data, the size of the global rechargeable-battery market will catapult from 25 gigawatt-hours (GWh) last year to as much as 1,000 GWh by 2025. The growth will largely be driven by the increase in electric vehicles. “The rise of electric vehicles may be a threat to the oil business but for the battery business, it is a great opportunity,” he said.

SK Innovation hopes to acquire 30 percent of the global market share in battery production by 2025.

The company threw its hat into the electric-vehicle battery business in 2008. Currently, it provides batteries to major auto companies including Kia Motors and China’s Beijing Automotive Industries Holdings. Yoon Ye-seon, president of the battery & I/E Materials division, said upon construction of a second battery plant in Korea this year, the company will build a factory in Eastern Europe to fulfill battery orders from Daimler AG.

Another key industry in SK Innovation’s future is chemicals. SK Global Chemical is a subsidiary of SK Innovation. The company said it will expand its portfolio from basic chemicals to packaging and automotive. Nexlene, a high-performing polyethylene developed based on the technologies of SK Global Chemical, has become essential in the packaging and automotive business, said Kim Hyung-kun, president of SK’s chemical unit.

China will be the central playing ground for SK’s chemical business. “About 60 percent of demand in chemical business will come from China,” said Kim. “Along with the rise in their income level, demand for high-end materials [such as Nexlene] will show explosive growth.”