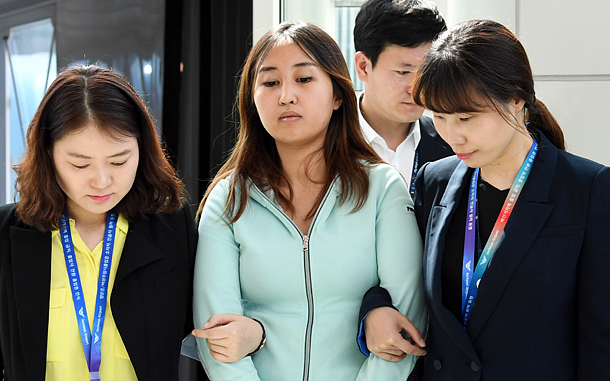 Chung Yoo-ra, daughter of jailed presidential chum Choi Soon-sil, is escorted at Incheon International Airport Wednesday afternoon following her extradition from Denmark, where she remained in custody for the past five months. [YONHAP]

The 20-year-old equestrian athlete, whose mother Choi Soon-sil is currently jailed and being tried with Park in a corruption scandal, told reporters after arriving at the airport that she returned to “resolve any misunderstandings.”

Chung denied knowledge of what transpired between her mother and former President Park and expressed a mild grievance, stating, “For now, I feel it’s a bit unfair.”

Prosecutors said Chung was arrested inflight earlier Wednesday with a pre-issued warrant aboard a Korean Air flight to Incheon from Amsterdam, where she had a layover after departing from Copenhagen on Tuesday.

The plane arrived at around 2:40 p.m. and Chung, wearing a hoodie over a T-shirt emblazoned with a yellow smiley face, got off the plane after other passengers had left. She faced reporters in an airport security area nearly 40 minutes later.

Chung was accompanied from Denmark by a team of five prosecution and Justice Ministry officials, where she had been in custody since the beginning of January.

Her repatriation to Korea came 245 days after she fled from Germany to Denmark last September as the scandal involving her mother and the former president unfolded. She went to Germany a month earlier.

Chung was arrested in Aalborg, Denmark, in early January for illegally staying in the country and detained for five months as she refused prosecutors’ summons to return to Korea.

Last week, a Danish court accepted the Korean prosecution’s demand for Chung to be extradited to Seoul, which she initially appealed.

She responded to accusations that she was the beneficiary of special treatment that to her mother’s connection with the president by saying, "Frankly, I do not know much, so I am trying to fit the puzzle together, but things aren’t connecting well."

She left behind a 23-month-old son, who is in the care of a nanny in Denmark.

Chung was asked why she dropped the appeal of her extradited after rejecting prosecution summons for so long,

"My baby has been staying there alone for too long, without a family,” she said. “I returned because I thought it would be better to quickly convey my stance, clear any misunderstandings, and resolve things soon.”

She said she expects her son to return to Korea but did not say when.

Chung, a dressage competitor, has been embroiled in various charges against her, such as receiving undue favors in admission and academic affairs at Seoul’s Ewha Womans University and also generous patronage by Samsung Group for her equestrian training.

She is expected to be questioned on any involvement in Samsung Electronics’ payment of 8 billion won ($7.15) to the mother’s shell company in Germany, which investigators called an illegal transfer of assets to a foreign country, and concealment of Samsung’s giving her an expensive racing horse.

But to a reporters’ question on Samsung’s support of her equestrian training, she replied, “I only heard that I was one of six [equestrian athletes] that Samsung was supporting.”

She accepted Ewha University’s decision to revoke her admission and apologized for the controversy.

“I didn’t go to school, so it is right that my admission was canceled. I don’t even know what my major is. I never wanted to go to university, not even once… I’m sorry about that.”

She said she was not aware of who was funding her son’s living expenses or her legal fees.

From the airport, Chung was transferred to the Seoul Central District Prosecutors' Office in Seocho District, southern Seoul, to undergo investigation.

Chung may be a key witness in the charges of meddling in state affairs facing her mother and in the bribery trial of Samsung Electronics Vice Chairman Lee Jae-yong.

Prosecutors have until 4:08 a.m. Friday to question Chung, 48 hours from the time of her arrest. Under criminal procedure law, the prosecution will have to decide on issuing an arrest warrant during this time.

Chung is expected to be charged with obstruction of duty over the special favors she received at Ewha, among others charges.
On the same day, just minutes before Chung touched down in Korea, prosecutors demanded a seven-year jail sentence for Choi, charging her with obstruction of duty for exerting influence at Ewha to ensure favors for her daughter.

Similarly, the prosecution sought a five-year sentence for former Ewha President Choi Kyung-hee and a four-year sentence for a professor, Namkung Gon, for their involvement in providing special treatment to Chung based on Choi’s request.