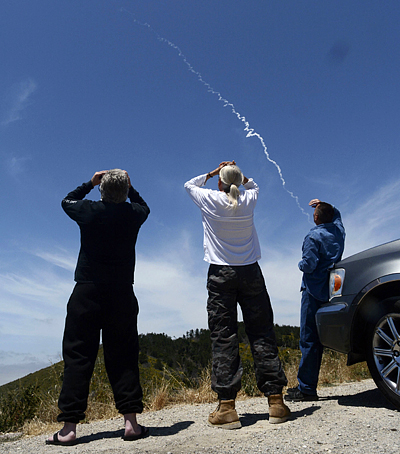 People watch a ground-based interceptor missile take off at Vandenberg Air Force base, California, on May 30. [AP/YONHAP]

In the wake of North Korea’s threat to test-launch an intercontinental ballistic missile (ICBM) with sufficient range to hit the U.S. mainland, the Pentagon announced Tuesday that its first live-fire test to shoot down an ICBM using its own ground-based missile defense system was a complete success.

The Missile Defense Agency (MDA), which conducted the test Tuesday in cooperation with the U.S. Air Force 30th Space Wing, the Joint Functional Component Command for Integrated Missile Defense and U.S. Northern Command, said an ICBM-class target was launched from the Marshall Islands and destroyed in a “direct collision” by a ground-based interceptor launched from California.

“The interception of a complex, threat-representative ICBM target is an incredible accomplishment” for the Ground-based Midcourse Defense system and a “critical milestone” for this program, Vice Adm. Jim Syring, director of the MDA, said in a statement.

Syring said the test demonstrated that the U.S. had a “capable, credible deterrent” against a “very real” threat. North Korea was not specifically mentioned. The MDA said its mission was to develop a missile defense system to defend the U.S., its deployed forces, allies and friends from limited ballistic missile attacks of “all ranges in all phases of flight.”

“Program officials will continue to evaluate system performance based upon telemetry and other data obtained during the test,” said the MDA.

The operation came two days after North Korea’s latest missile test, the ninth this year and the third since South Korean President Moon Jae-in’s inauguration. In stark contrast to the MDA, however, the Center for Arms Control and Non-proliferation, a Washington-based nongovernmental organization of military experts, expressed doubt over whether the United States was actually prepared to intercept a North Korean ICBM, citing the country’s checkered history.

“Unfortunately, the $40 billion system’s successful testing record now stands at just 40 percent since it was declared operational in 2004, despite all tests being highly scripted for success,” the center said in a statement.

Philip E. Coyle, a senior science fellow at the center who formerly headed the Pentagon’s Office of Operational Test and Evaluation, said the Ground-based Midcourse Defense program had “a long way to go,” saying “40 percent isn’t a passing grade.”

Coyle also noted, “The mock enemy target was only barely of ICBM range and slower than an ICBM from North Korea to Los Angeles,” adding, “The closing velocity, the closure rate between the target and the interceptor also was slower than an intercept would be between a North Korean ICBM and a U.S. interceptor.”