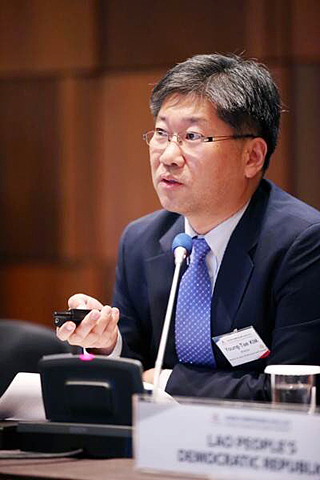 Kim Young-tae will serve as the first Korean secretary general of the International Transport Forum. [MINISTRY OF LAND, INFRASTRUCTURE AND TRANSPORT]

LEIPZIG, Germany - Kim Young-tae, a Korean transport policy expert, on Thursday was named secretary general of the International Transport Forum (ITF), an intergovernmental body under the OECD dedicated to improving the quality and efficiency of world transport.

The announcement was made at the annual forum here of transport ministers. While Korea has been expanding its influence in the ITF after official approval as a member in 2007, the election is expected to further boost the country’s presence in global discussions about transportation during Kim’s five-year term which starts in September.

Kim’s elevation to the post can be credited to his 24-year career as a policy maker in Korea’s transportation infrastructure. He also has substantial experience abroad, having studied in France, home of the OECD for six years and spending two and a half years on the Transport Management Board, which gives direction to the ITF. Under Kim’s stead, the forum will likely bring in more countries from Africa and Asia.

Since the ITF’s establishment, the group has largely focused on Europe, as it stemmed from a European transport ministers’ meeting in 2006. Out of 59 members in the ITF, 15 are from outside Europe.

Kim competed with 100 other applicants from 26 countries, according to Korea’s Ministry of Land, Infrastructure and Transport. He earned 68 percent support from 50 voting countries. It is the first time a Korean has been named to a director position of A7, the highest among grades that range from A1 at the OECD.

Below are edited excerpts from an exclusive interview with Kim after his election.

Q. What are your ambitions as the first ITF secretary general from Asia?

A. It’s true that the forum has more discussions focused on Europe even though it is an international organization. It’s simply because the forum has its roots in the European Conference of Ministers of Transport founded in 1953. However, that means the forum will aim toward including more non-European partners going forward, which is where I can play a part. The most recent membership to the forum include Kazakhstan, and the United Arab Emirates, all of which are non-European countries.

Why do you think a Korean figure was elected among others?

Well, Korea as a country has been spotlighted for its rapid development. It rose from the ashes of war through foreign aid and has become a nation that offers others aid. Many countries want to learn how Korea built its top-notch transportation infrastructure in such a short amount of time. Of course, my election could bring Korea more opportunities to learn from other countries as well.

Where do you think Korea’s transport system is compared to the rest of the world?

I’ve been to 55 countries in my life. My perception may not be the most objective, but I think Korea is in the mid-upper level. Our public transport systems are well established and affordable for citizens to use. Still, I think the Korean government needs to develop a more holistic view for further development. For instance, transport is part of worldwide smart city initiatives, and the two cannot be separated. As role allocation is dispersed over ministries, there is a danger of losing the big picture.

No Korean has actually been placed at your rank in the OECD.

Yes, our penetration into international organizations is relatively low. I’m hoping my election can lead to more Koreans going global and playing a role in international groups.