Chinese dissident: Trump ‘has to be challenged’

Chinese dissident: Trump ‘has to be challenged’ 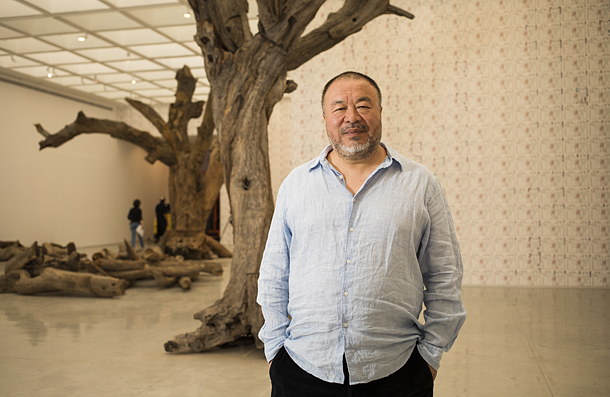 Chinese artist Ai Weiwei poses before the opening of his exhibition in the Israel Museum in Jerusalem on Thursday. In an interview with the Associated Press, Weiwei encouraged people across the world to challenge their leaders, including U.S. President Donald Trump, to fend off threats to basic human values posed by governments. [AP/YONHAP]

JERUSALEM - Chinese dissident artist Ai Weiwei on Thursday encouraged people across the world to challenge their leaders, including U.S. President Donald Trump, in order to fend off what he said are threats to basic human values posed by governments.

In Israel for the opening of his first exhibition in the Mideast country, the controversial artist, whose work often deals with the grim side of human nature, said people are locked in an almost permanent battle with their leaders and governments.

“Trump himself has to be challenged,” he said. “You can recognize it’s happening. It’s not so easy.”

Ai spoke at the Israel Museum in Jerusalem, where his exhibit “Maybe, Maybe Not,” is to open on Friday.

He stood on his artwork titled “Soft Ground,” a hand woven 250-square-meter (2,700-square-foot) carpet that replicates the floor of Munich’s Haus der Kunst, the gallery where Nazi-approved artwork was displayed during the Third Reich.

He insisted people need to challenge authority in every way to protect their gained freedoms, but conceded that this would be difficult.

“Any political struggle takes both sides,’ Weiwei told The Associated Press at the museum. “There are people defending those values and there are people who are always trying to take away some of the most important values of our lives.”

The exhibition gathers a series of installation works, including “Sunflower Seeds,” a collection of millions of handcrafted and painted porcelain seeds that is meant to critique China’s modern-day mass production methods that have overwhelmed traditional manufacturing and handicraft.

Asked if he had similar criticism for the ongoing conflict between Israel and Palestinians, Ai did not openly criticize Israel. But he said his decision to put on the exhibition in Israel shows he doesn’t shy away from difficult issues and that he seeks to put himself in the center of the argument.

Ai was in Gaza in 2016 to shoot a documentary film, “Human Flow,” about the plight of refugees that will be released for distribution globally late this summer.

Ai called for a unified response to the migrant crisis, an issue central to his work.

“We see in today Europe we see a lot people trying to push refugees away,” Aid said. “Humanity always will win. I don’t think this kind of segregation and hatred can win.”

In 2011, Ai was detained by Chinese authorities for his outspoken views on human rights. Ai’s passport was withheld for four years but was returned to him in July 2015. The artist now works from a studio in Germany and has traveled the world to document the plight of refugees and migrants.

James Snyder, president of the International Council of the Israel Museum, said he was not concerned with any of Ai’s messages striking the wrong chords in Israel, where opinion is divided on how to pursue peace with Palestinians.

“In our museum, always our modus operandi is to lift geopolitics from the map and dig into the cultural landscape underneath,” Snyder said.

The exhibition will run through Oct. 28. AP