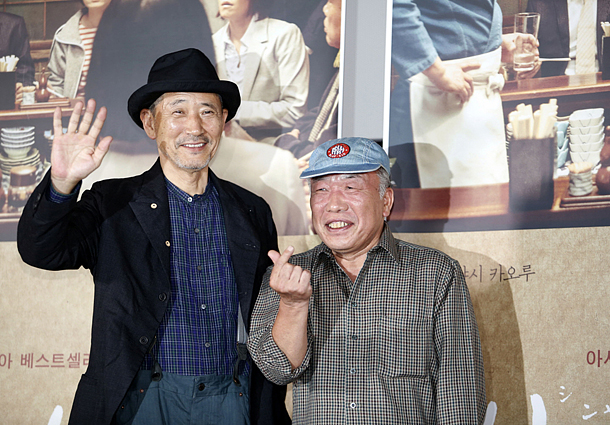 Actors Kaoru Kobayashi, left, and Mansaku Fuwa met with the Korean press on Thursday to promote the newest installment of the movie “Midnight Diner 2.” The Japanese film will hit local theaters on Thursday. [DSTATION]

Not many can put their finger on what exactly they love so much about “Midnight Diner,” the hit Japanese television series, but it’s unique charm and relaxed tone have helped it to be popular enough to run for over nine years and even jump to the big screen.

Adapted from a long-running manga, it revolves around people’s comings and goings at a small restaurant in downtown Tokyo. The story is built around a middle-aged man known as Master, who cooks homey meals throughout the night for people living in the margins of the glimmering metropolis. Those customers often share their stories while sitting at the counter.

Ahead of the release of the franchise’s second movie, two of its actors - Kaoru Kobayashi and Mansaku Fuwa - visited Korea to meet the press.

Kobayashi plays Master, who serves as the narrative’s moral fulcrum, while Fuwa plays a regular visitor to the snack bar, who has appeared in the franchise since it began in 2009. 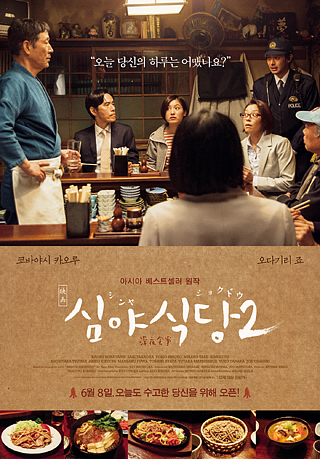 “When something is a franchise, the next [iteration of the] work usually comes out every two to three years, but for ‘Midnight Diner,’ it feels like we have worked on it throughout the past nine years,” said Kobayashi during a press event held on Thursday. “It has produced 40 episodes and two movies. I never imagined that I would be taking part in it for such a long period.”

The biggest difference between the upcoming film and the previous works, is the depiction of a more human side of Master.

Kobayashi explained that reason he believes that Master continues to have regular customers at his snack bar is the character’s special charms. So, he asked the director to make the character more human by allowing him to make mistakes, be humorous or even be cute instead of being the usual reticent, mysterious and serious character.

The changes are evident in the newest installment, like in a scene where Master becomes shy after being seduced by a female customer.

Regarding the mysterious back stories, such as where Master got the scar on his face from, Kobayashi said that some things are just best left untold.

“The less information it is provided to viewers, the deeper the story gets. I think arousing people’s curiosity by not fulfilling their questions makes them feel more interested. This is something that the director and I agreed on.”

Though the story has been popular enough to be adapted in a number of countries, including South Korea and China, Kobayashi says that even he still does not know what its charm really is.

“I truly don’t know why so many people like this franchise. I had never expected it would be so well-received outside of Japan. Though I’m very happy about its popularity, I’m not sure of the reason behind it.”

Co-star Fuwa, on the other hand, said that the familiar taste of food functioning as a medium to connect people is one of the best charms of “Midnight Diner.”

“Midnight Diner 2” is rated 12 and over and will come out in theaters on Thursday.