Moon stalls Thaad with a study

Moon stalls Thaad with a study 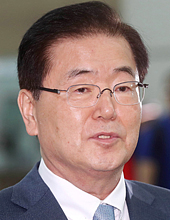 The government will conduct a full-scale environmental study on the U.S. military’s deployment of a controversial antimissile battery in Korea, a senior security adviser to President Moon Jae-in said Thursday, stressing that the probe will delay the installment of the battery.

Chung Eui-yong, head of the National Security Office of the Blue House, addressed the latest controversy surrounding the U.S. deployment of the Terminal High Altitude Area Defense, or Thaad system. An investigation of top security officials from the previous administration is currently ongoing to find out if they intentionally withheld from the Moon government information on the delivery of four additional launchers for the system.

“In order to conduct a more thorough environmental-impact study, I think [the deployment] may take more time than originally planned,” Chung said. “But I cannot predict how long the environmental study will take.”

Chung made the remark as he arrived in Washington to meet with senior U.S. officials to prepare for the upcoming summit between Moon and U.S. President Donald Trump.

Moon also takes the environmental study seriously, Chung said, adding that the president recently told a visiting U.S. politician about the importance of winning public support for the controversial deployment. “The decision-making process had some flaws and lacked democratic integrity and transparency, so many people are skeptical,” Moon was quoted by Chung as telling U.S. Senator Richard Durbin during their meeting on Wednesday. “Moon told him that there is a strong public demand for a thorough environmental study.”

Chung said Washington understands that the probe concerning the four unreported launchers is a domestic issue and not an obstacle to Korea-U.S. ties. He said his trip is mainly to prepare for Moon’s visit to the United States, scheduled for later this month.

“I am not sure how much of our discussion will be on Thaad,” he said, “but I am here to confirm Moon’s itinerary for the summit.”

Seoul and Washington agreed to the Thaad deployment in July 2016. Key components, including a radar system and two missile launchers, were installed on a former golf course in Seongju, North Gyeongsang, on April 26, less than two weeks before the May 9 election that brought Moon to power. A Thaad battery typically consists of six launchers, 48 interceptor missiles, a communication unit and a radar.

The rushed deployment took place before an environmental study was concluded. Seongju residents expressed concern over risks to health and agricultural produce that could be caused by Thaad’s powerful X-band radar, and the Ministry of National Defense promised a study.

A summary environmental impact study began in December and is scheduled to wrap up at the end of this month, although the installment already began in April. Four additional launchers were to be placed after the environmental study finished.

Moon’s plan to conduct a full-scale environmental study will likely take about one year.

The Ministry of National Defense said the deployment does not require a full-scale environmental study, citing the Environmental Impact Assessment Act. The ministry said it decided to conduct a summary study because the antimissile system takes up less than 100,000 square meters (24.7 acres). Korea offered a 320,000 square-meter site in Seongju, but the U.S. military’s design showed that it uses only a part of the land, the ministry said. The law requires a full-scale environmental study when the site is larger than 330,000 square meters, it said. Moon also wants a discussion at the National Assembly on the Thaad development, and that will also likely cause a delay. The president’s plan to bring the issue to the legislature was confirmed once again when he met Durbin this week, although Moon assured that the discussion at the National Assembly and the environmental study are not intended to reverse the deployment.

The ruling Democratic Party said it wants a National Assembly hearing to go over the decision-making and implementation process of the Thaad deployment under the previous administration. Opposition parties, however, criticized the Blue House and the ruling party for having stirred up an unnecessary security crisis.