The remarkable rise of BTS

The remarkable rise of BTS 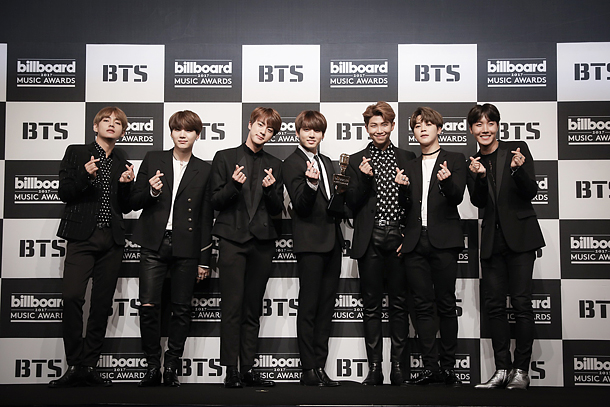 “Wings,” the 2016 album by seven-man K-pop group BTS, is flying high. The album sold more than one million copies around the world and won BTS the Billboard Music Award for “Top Social Artist” with 75 percent of 300 million votes. Without any stateside promotion or a viral video a la “Gangnam Style,” BTS rose to stardom with the power of its music and direct communication with fans around the world through social media.

The BTS boys sing in Korean, and the group does not have any songs with English lyrics targeting the U.S. market. Nonetheless, they have garnered praise for their musical talent and communication. “We don’t need to know the language to feel the passion of these young, emerging artists,” read one comment. “A raw approach to culture by the young generation,” said another. “BTS does not exclude fans who don’t know Korean.”

Even without the prestigious award, I was always curious about BTS since their debut. It is ironic that this industrially manufactured “idol group” is doing hip hop music that requires sincerity. “Bulletproof” reminds me of military culture, far from creativity, and “Boy Scouts” sounds so rigid and square. The fan club calls itself the “Army.”

The list of ironies goes on as you see their concerts and music videos. They like to wear uniforms but also lightly bleach their hair and dance energetically. They look like a typical boy band, but all of them participate in composing their songs. Their choreography is intense and requires high level of mastery, but some of the members say they are not born dancers and had to endure strenuous practice.

Most of all, their music does not shy away from feelings of frustration, anger and social awareness that so many young people share today, unlike songs by other groups that touch on topics of luxury, partying, romance and breakups. Foreign critics have praised BTS as socially conscious K-pop artists.

In late 2016, when anti-Park Geun-hye protesters lit up candles in Gwanghwamun and sang democracy protest songs from the 80s and 90s, BTS’ music video “Not Today” was trending on YouTube. It called on young people around the world to stand together against neoliberalism. BTS is opening the first door to a Korean Wave that is on the fringes of mainstream culture.

*The author is a professor in the Department of Communication at Seoul National University.