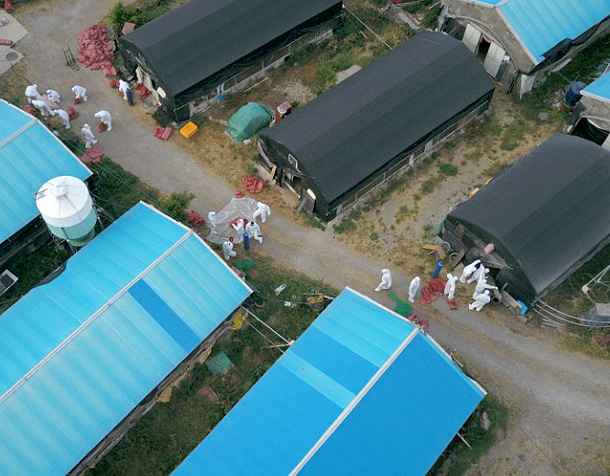 Health authorities cull poultry at a farm in Jeju on Sunday after the H5N8 strain of avian influenza was found at a farm on the island. [YONHAP]

The Korean government has prohibited all sales of live poultry in the country starting today and raised the bird flu warning level from second to third in its four-tier system after a strain of avian influenza was found in the provinces of Jeju and North Jeolla.

“Whether the strain is highly pathogenic is yet to be confirmed, but all avian influenza prevention headquarters and disease control posts will be in full operation throughout the country,” the ministry said in a press release Saturday.

Five chickens purchased by a farm in Jeju on May 27 died suddenly two days later. The farm did not immediately report the deaths to health authorities. Three more chickens died on Friday, when the farm finally reported the cases.

After the chickens were confirmed to have been infected by the H5N8 strain, some 12,000 chickens and ducks were culled in 14 farms within a 3-kilometer (2-mile) range of the affected farm in Jeju over the weekend.

The H5N8 strain was also discovered on Saturday at a farm in Gunsan, North Jeolla. It had shipped 1,000 birds to markets in Jeju. The farm is located about 4.5 kilometers from Geumgang Lake, a natural habitat for migratory birds. Avian influenza outbreaks often begin at these habitats.

Health authorities culled the farm’s 13,400 chickens on Saturday, according to the North Jeolla provincial government. There are four more farms with a total of some 200,000 chickens in a 3-kilometer range from the affected farm, but all have tested negative in a preliminary inspection.

The Gunsan farm’s potentially infected birds may have reached more areas than Jeju. Farms in Paju, Gyeonggi, and Yangsan, South Gyeongsang, had bought chickens shipped out from the affected farm in Gunsan. Health authorities culled some 1,600 chickens and turkeys at one farm in Paju on Sunday. It had bought 500 chickens from the farm in Gunsan on May 23, and they tested positive in a preliminary avian influenza test.

In Yangsan, health authorities slaughtered around 1,100 chickens at 14 farms in the area on Saturday as a preventative measure. They had bought a total of 150 chickens from the farm in Gunsan, but they did not test positive in a preliminary avian influenza test. Health authorities have requested an official inspection from the livestock inspection body of the provincial government.

The recent bird flu reports are the first in two months since the last outbreak on April 4 in Nonsan, South Chungcheong. The Agriculture Ministry on May 13 had lifted a ban on movement of poultry throughout the country and on Thursday had lowered the avian influenza warning from the third level to second level before having to raise it again on Sunday.

The ministry most recently raised the avian influenza warning to the highest fourth level on Dec. 16, 2016, when 76 out of 92 cases tested positive for bird flu, and a total of 19.1 million birds were culled. It had lowered the warning to the third level on April 19 this year.