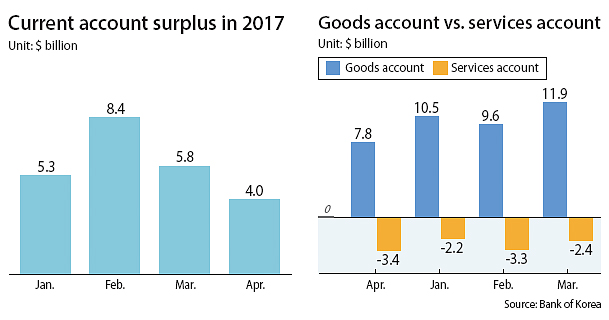 Although Korea’s current account balance was positive in April, the surplus fell to its lowest level in a year, according to the latest data released Monday by the central bank, dragged down by high dividends paid by Korean companies as well as the service balance, which has continued to be in the red for over two years now.

“In April 2017, Korea’s current account registered a surplus of $4 billion,” the Bank of Korea said in a report Monday, continuing a rally into a record 62nd month.

While the nation’s monthly current account balance continues to be in the black, April’s figure is the lowest level since April 2016, when the surplus stood at around $3.8 billion. It shrank by $1.7 billion from last month.

The surplus in the current account means the country is a net lender and that its earnings from transactions with other countries have exceeded borrowing.

The main cause of the current account surplus’ retreat was the primary income account. The account’s deficit widened drastically from $590 million in March to $5 billion in April. The central bank’s report said this was “in line with an increase in payments on the equity account.” In April, the equity account recorded a deficit of $5.3 billion, the largest deficit in history.

Choi Jeong-tae, a director in charge of balance of payment statistics at the central bank, said that while investors in the past only cared about profit, they are increasingly demanding dividends. “Dividend payments increased with more foreigners investing in the domestic stock market as earnings of [Korean] companies continue to improve,” Choi said.

The services account deficit in April was $2.38 billion. While it was an improvement from March, when the deficit was $3.27 billion, Korea continues to see losses from a diplomatic row between Beijing and Seoul over a controversial U.S. missile defense system that has spilled over into the trade realm and led to fewer Chinese tourists visiting Korea.

The travel account was in the red at $1.24 billion in April and widened drastically compared to a year before when the deficit was at $530 million. The accumulated deficit in the travel account from January to April 2016 was $2.51 billion, about half the deficit from the same period this year, which stands at $4.99 billion.