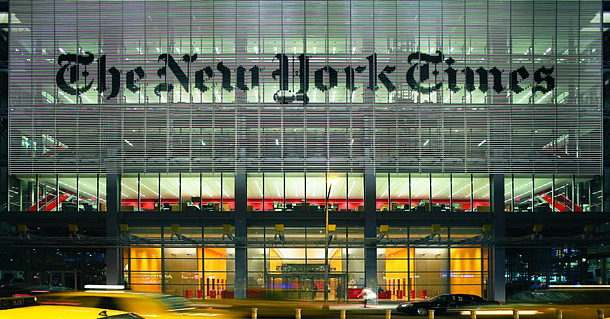 “It’s all thanks to President Trump,” said the New York Times staff I met last month in New York regarding the company’s recent surge of subscribers. Traditional American media outlets such as The New York Times and CNN are enjoying an unexpected boom. Since President Donald Trump criticized established media reports as “fake news” before and after the election and communicates directly with the public through social media, non-supporters are actively subscribing to and viewing these media outlets.

In the first quarter, The New York Times showed a strong performance, with sales revenue up by 5 percent compared to the same period last year, and net profit having surged from deficit to surplus. What changed the trend was online subscription. In the first quarter, the number of paying online subscribers increased by 308,000, the biggest margin in history. As of the end of March, the number of subscribers reached 2.2 million, a 62 percent increase from the same period last year. New York Times CEO Mark Thompson calls it a “subscription bump,” in reference to the Trump bump, the instant surge of the stock market in anticipation of deregulation.

However, the trend is not likely to last long. In fact, traditional media are struggling around the world. As Facebook and Google become new platform to consume and distribute news, conventional media outlets are suffering from declining advertisement revenues. While they are seeking transformation by shifting to digital media, the increase in digital news is slower than the decline of paper media and other existing source of income.

Traditional media’s focus now is to convince consumers accustomed to free content to become paying readers. The New York Times and other major American media outlets are looking to millennials for a solution. Those who were born between 1982 and 2000 are familiar with information technology, having used the internet and social media from childhood. At the International News Media Association World Congress in New York on May 23, NYT CEO Mark Thompson suggested that millennials are more used to paying for media than those from Generation X, born between 1965 and 1976, who have been enjoying free content since the beginning of the internet. “Millennials are more open-minded. They’ve grown up with Spotify and Netflix.”

The New York Times and Wall Street Journal are courting young readers by offering discounts to students, but it remains uncertain if the strategy is effective. Last year, one third of the total visitors to traditional news media such as the New York Times, USA Today and NBC News were millennials. In contrast, millennials make up 60 percent of the readers of internet news outlets like Buzzfeed and Mic readers. Millennials are emerging as the world’s largest demographic and the direction of the news media could depend on their choices.