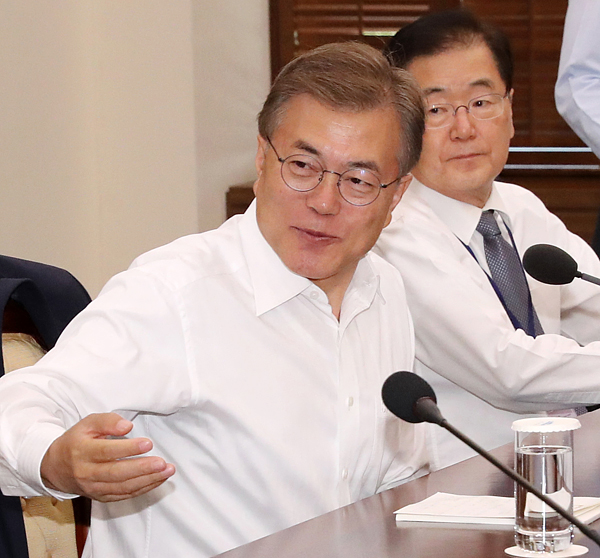 A fact-finding mission into the deployment of a U.S. antimissile system in Korea in April raised a new suspicion that the Ministry of National Defense tried to sidestep an environmental study required by the law, the Blue House said Monday.

Following the discovery, President Moon Jae-in ordered a proper environmental study, effectively stalling the deployment schedule to be completed by the end of this year.

The probe also found that Lt. Gen. Wee Seung-ho, deputy defense minister of policy, has ordered his team to delete crucial pieces of information from a report to Moon’s security team, Yoon Young-chan, senior secretary for public relations, said in a press briefing.

The probe identified Wee as responsible for the omission and revealed that the ministry tried to avoid the environmental impact study. The conclusion was reported to Moon at the senior secretariat meeting on Monday.

Despite protests by Beijing and Moscow, Seoul and Washington agreed on the deployment of a Thaad battery in July 2016.

Key components of a Thaad battery, including a radar system and two missile launchers, were installed on a former golf course in Seongju, North Gyeongsang, on April 26 - less than two weeks before the May 9 election that brought Moon to power.

A Thaad battery typically consists of six launchers, 48 interceptors, a fire control and communication unit and radar. The military authorities of Korea and the United States planned to complete the deployment before the end of this year.

According to Yoon, the ministry created a plan on Nov. 25, 2016 that it will offer the Seongju site to the U.S. military in two separate transfers. Of the 700,000 square-meter (173-acre) site, a 328,779 square-meter piece was transferred in the first phase and another piece, about 370,000 square meters, was planned to be offered later in the second phase.

Yoon then said the first phase site is an odd-looking inverse U-shaped piece of land. “The shape was abnormally designed in order to exclude the land that is supposed to be inside the U shape,” he said.

Moon ordered the defense ministry to conduct a proper environmental study in order to persuade the public with procedural legitimacy, Yoon said. He also ordered a further probe to find out who ordered the attempt to sidestep the study and why. A summary study takes about six months, but a full-scale survey takes about a year.

A Blue House official told the JoongAng Ilbo that the entire decision-making and implementation of the Thaad deployment will be investigated, but the probe is not intended to reverse the placement. Moon already told a visiting U.S. politician last month about his intention to conduct an environmental study.

During his meeting with U.S. Senator Richard Durbin, Moon stressed the need for a through environmental study and a discussion at the National Assembly to win public support for the deployment.

Yoon also said Monday that it was unacceptable for the defense ministry to withhold important information from the president.

Although a draft of the ministry’s report to Chung stated the delivery of six launchers and the location where the four launchers were stored, Wee ordered the information to be deleted, Yoon said.

According to Yoon, Wee justified his action by saying that the government agreed with the U.S. military to keep the information secret and that he was going to give Chung a verbal explanation. He, however, did not do so.

“The agreement with the U.S. military to keep the information secret is a principle you use when responding to media,” Yoon said.

“It is irrelevant when you are reporting to the commander-in-chief of our military. In the previous administration, the National Security Council was briefed about it and even the acting president knew.”

The rushed installation of two launchers and a radar system in Seongju in April took place while the country was under the leadership of an acting president after Park Geun-hye was impeached and removed from office in March.

“It is unacceptable that the ministry deleted the information from a report for its first briefing to the new presidential office because of a secrecy pact with the U.S. military,” Yoon said. “Wee was excluded from his duty and further investigations will take place.”

While the Blue House said it was a courtesy call, diplomatic and military sources told the JoongAng Ilbo that Syring came to Korea to visit the Thaad unit in Seongju and the meeting with Chung was to explain the importance of the deployment.