After an emissary visits Beijing

After an emissary visits Beijing 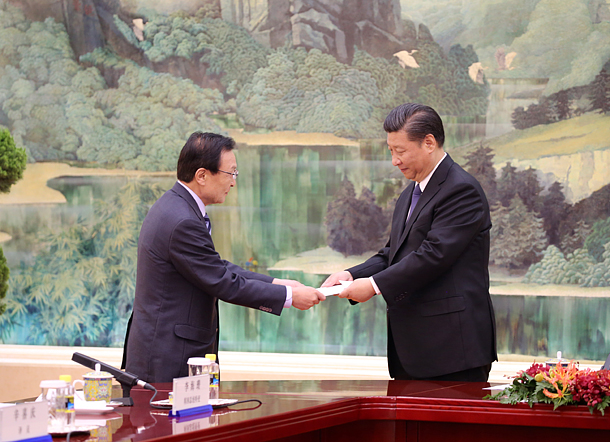 Among the three northeast Asian countries, the best bilateral relationship is between China and Japan. While diplomats in Beijing jokingly say that, it may not be entirely a joke, considering current circumstances.

Last week, China’s State Councilor Yang Jiechi visited Japan for his fourth meeting with Shotaro Yachi, head of Japan’s National Security Council. No matter how bad China-Japan relations are, high-level talk channels always have been maintained. In contrast, strategic talks between Yang and his Korean partner, the Blue House national security director, were held once during the Park Geun-hye administration.

Another recent incident juxtaposes China-Japan relations to the Korea-China relationship. Former Prime Minister Lee Hae-chan visited China as a special envoy of President Moon Jae-in, and in a meeting with Chinese President Xi Jinping, the seating arrangement was considered disrespectful to protocol. President Xi sat at the top of the table as if he was chairing a meeting. The Korean delegation later explained that the arrangement was to accommodate more working-level dialogues.

Three days before the meeting, President Xi met with Toshihiro Nikai, secretary general of Japan’s Liberal Democratic Party. He was visiting China to attend the One Road One Belt forum and was effectively a special envoy bearing Prime Minister Abe’s letter.

Xi and Nikai sat across from each other at a long table, with Chinese and Japanese attendees on both sides. Was it really a mistake, coincidence or consideration for more working-level talks to change the seating arrangement so that Xi was in the top seat?

At the press briefing, the delegation delivered Yang’s words to relieve the retaliatory measures over the Thaad deployment. Korean media reported it as a major accomplishment. Later, it was learned that the phrase “considering changes of the public sentiment” was omitted. What Yang said was that China would respond as the Chinese anti-Korean sentiment changes according to Korea’s plan to resolve the Thaad controversy.

Lawmaker Park Byung-seok said that the delegation’s activities in China had improved relations. There was a report that the Thaad retaliation would end in a week. Since the special envoy’s visit, Beijing remains unfriendly. Authorities are concerned that President Moon’s visit to China in August may not happen. A special envoy, diplomats and the media need to deliver facts. They need to give up the ambition to glorify their accomplishments.

We must not forget the lesson from the Japanese invasion of 1592. The king sent two envoys to Japan, and they returned with contradicting reports. The king trusted the one with a favorable report and slacked defense, which resulted in a seven year ordeal.