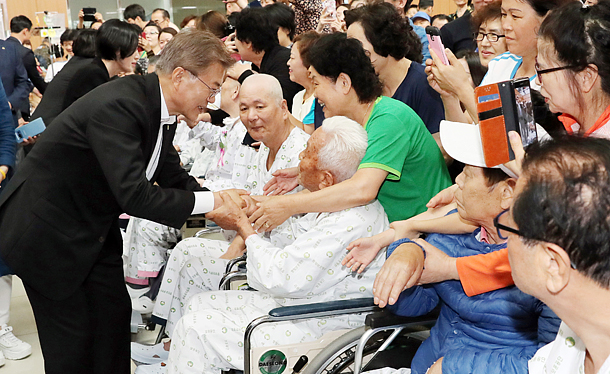 President Moon Jae-in on Tuesday promised to re-evaluate the past to find forgotten and unknown heroes who helped make the nation great.

In a speech marking Memorial Day, he also promised to enhance benefits for patriots, including independence fighters under Japan’s 1910-45 colonial rule.

“Today, here at the National Cemetery, I think of patriotism. Without our people’s patriotism, Korea as it is today would not have existed,” the president said.

The president said it was numerous independence fighters who first helped defend the nation.

“It was the faith of independence fighters that kept the name of our nation from disappearing in history,” he said.

However, the president added, “It took a long time, even after the country’s liberation from the Japanese colonial rule, before the independence fighters and their descendants began to receive the recognition and treatment they deserved. The unfair reality that independence fighters will live poor for three generations and that pro-Japanese collaborators will prosper for three generations down still remains a fact.”

The president vowed to change that.

“The reward for sacrifice cannot just be hollow words. We will try and find one more independence fighter, one more descendant and one more moment of their glorious fights. We will remember and cherish them. That is what a nation must do,” he said.

The president also promised to find the remains of veterans missing from the 1950-53 Korean War.

Moon said his administration’s efforts to boost benefits for veterans and national heroes will begin with a move to raise the status of the veterans affairs ministry to a full ministry from an agency, which was included in a government reorganization plan revealed Monday.

“There must be a clear belief that a sacrifice for the nation will be rewarded and betrayal will be punished,” he said.

Still, the president noted patriotism did not always require giving up one’s life for the nation.

“Today, I wish to remember with you all that devotion and sacrifice did not only take place on the battlefield. When the country was in need of every dollar it had, there were people who worked for the country’s modernization while being thousands of miles away in Germany,” Moon said, referring to thousands of South Korean mine workers and nurses who went to the European country in the 1960s, partly to make their own living but still helped the country secure much needed hard currency.

“Today, I, on behalf of the government, offer a medal from our hearts to each and every one of you who lived and endured for our poor nation,” the president said.