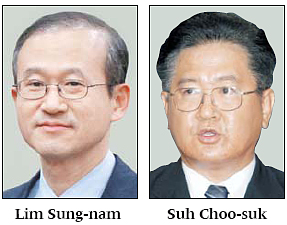 President Moon Jae-in on Tuesday named Lim Sung-nam as vice foreign minister and Suh Choo-suk as vice defense minister to fill the vacuum in his administration as his national security team is reeling from a crisis ahead of his trip to Washington later this month for a summit with U.S. President Donald Trump.

Moon named six vice ministers for key ministries, said Park Soo-hyun, presidential spokesman. The president largely recruited specialists who once worked in the Blue House during the presidency of the late Roh Moo-hyun, his lifelong friend, partner and political mentor.

Lim, an elite diplomat who served in various key posts of the Foreign Ministry, will keep his post as the first vice minister. He is known as a veteran strategist who served in the Roh Blue House as a staffer from June 2006 to January 2007.

Suh is a researcher who served as the senior national security secretary and strategy planning director of the National Security Council of the Roh Blue House. Park said Suh will be tasked to oversee defense reform.

During his service in the Blue House, Suh was labeled a member of a faction that promoted independent national defense while lessening the country’s heavy reliance on the United States.

Kim Yong-soo, a member of the Korea Communications Commission, was named second vice minister of science, ICT and future planning. Kwon Deok-cheol, a senior official of the Health and Welfare Ministry, was promoted to vice minister. Na Jong-min, a longtime public servant, was named the first vice minister of culture, sports and tourism.

Kim Hyun-chul, a professor at Seoul National University, was named senior adviser for the economy.

The appointments of senior posts were announced as Moon struggles to form his administration. As of Tuesday, Moon only nominated six out of 18 ministers to form his cabinet, and the appointments of vice ministers appeared to end the administrative vacuum that continued for months since his predecessor’s removal from presidency in March. Moon took office on May 10, the next day of a snap presidential election, and began the term without a transition period.

Concerns are particularly high for the delayed formation of foreign affairs and national security team at the Blue House. Moon will have to deal with North Korea’s intensifying nuclear and missile threats, China’s fierce opposition against the U.S. military’s deployment of a powerful antimissile system in Korea and the possible realignment of the Korea-U.S. alliance.

Fueling the appointment crisis was the abrupt resignation of the second vice chief of the Blue House’s National Security Office. Kim Ki-jung resigned Monday, following rumors about his unethical behavior as a professor before joining the presidential team less than two weeks ago.

As the second vice chief of national security, Kim was in charge of foreign, unification, intelligence and cyber security affairs. Moon created the position when he restructured the Blue House last month and handed over the tasks once handled by the foreign affairs and national security senior secretary in the past.

Kim was also in charge of preparing the upcoming summit between Moon and Trump.

Sources said Chung Eui-yong, chief of the National Security Office, is overloaded, as he is now attending to almost all issues concerning foreign affairs, North Korea and defense. Although the office still has secretaries dispatched from the foreign, unification and defense ministries during the Park Geun-hye administration, most are ruled out from key tasks, sources said, as they are likely to leave the Blue House soon when a reshuffle takes place. Director-level staffers are reportedly handling actual work.

Filling the vacancy is an additional burden for the new president, whose cabinet does not have new foreign and defense ministers. Moon’s nominee to become the foreign minister, Kang Kyung-wha, is struggling to go through a National Assembly confirmation hearing.

Lawmakers are scheduled to question her today.

Kang has apologized for having used a fake address to send her child to a better school. Her daughter was also accused of tax evasion.

When Moon first named Kang to become the country’s first female foreign minister, some questioned her lack of experience in handling bilateral relations with major countries such as the United States, China and Japan.

Kang is not a career diplomat - she was an English language professor until she joined the foreign ministry in 1999 as an assistant of the minister.

She is an expert in multilateral diplomacy and served key posts in the United Nations. She was the senior adviser on policy for UN Secretary General Antonio Guterres before joining Moon’s team.

While the conservative opposition Liberty Korea and Bareun parties opposed her appointment, the People’s Party, the third largest power in the legislature, is split.

Some of its lawmakers, including former Chairman Park Jie-won, support her as the new foreign minister, while others do not.

It remains to be seen if the National Assembly will confirm Kang. Although Moon does not need the legislature’s approval, an appointment against the lawmakers’ opposition will likely invite political trouble.

Moon has also yet to name a new defense minister.

Minister of National Defense Han Min-koo is a holdover from the Park administration and is still heading the ministry amid the intensifying controversy surrounding the Blue House’s probe into the previous government’s decision to allow the U.S. military’s deployment of an advanced antimissile system in Korea to deter North Korean threats.