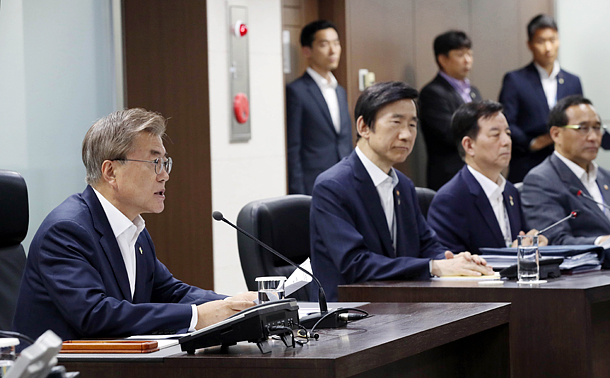 North Korea fired several short-range antiship cruise missiles Thursday morning off its eastern coast, which flew about 200 kilometers (124 miles) after peaking at an altitude of 2 kilometers before landing in the East Sea, local military officials said.

The first missile, detected by South Korean authorities at 6:18 a.m., was followed by “several more” projectiles for “several minutes.” The type of missile was not immediately known, as is often the usual case. South Korea’s Joint Chiefs of Staff said the missiles were fired from the vicinity of North Korea’s eastern coastal city of Wonsan, Kangwon Province.

The South Korean and U.S. militaries are cooperating for further analysis. It was North Korea’s fifth missile test since President Moon Jae-in took office on May 10, and its 10th this year.

An official at the South’s Ministry of National Defense said North Korea appeared to try to show off its capacity to target and hit American aircraft carriers training in South Korean waters, or seize the upper hand in its relations with Seoul and Washington.

President Moon presided over a National Security Council (NSC) meeting at the Blue House at 2 p.m. Thursday. It was Moon’s first time chairing an NSC meeting, though he attended one before after a previous test.

Presidential spokesman Park Soo-hyun said in a statement that the fact that Moon himself was presiding over an NSC meeting, along with Prime Minister Lee Nak-yon’s participation in the session, was a “significant” message that the South Korean government took the missile provocations seriously, even though Pyongyang “repetitively and habitually” fires them.

“All North Korea can earn from provocations like this is international isolation and economic hardship,” said Moon. “When it comes to national security, our government will not retreat a single step.”

Moon urged the military to strive towards achieving “self defense capability” against North Korean nuclear and missile threats, an apparent hint he would seek more independence from the South Korean-U.S. alliance.

CNN reported that the Pentagon was not expected to release its typical statement about tracking the launches because they were not ballistic missiles capable of posing a long-range threat. Cruise missiles usually fly in a straight line just above ground level, whereas a ballistic missile soars up and then down in a ballistic arc.

Pyongyang, which usually brags about any successful missile test the following day, has yet to mention anything on its state-run media.

On Wednesday, the head of the U.S. Missile Defense Agency, Vice Admiral James Syring, told a hearing of the U.S. House Armed Services Committee that technological advances demonstrated by North Korea in its ballistic missile program over the past six months had caused him “great concern,” according to Reuters.

Syring added it was incumbent on his agency to assume that the North today could reach the U.S. with an intercontinental ballistic missile (ICBM) carrying a nuclear warhead.

The latest missile test came 10 days after North Korea’s previous launch, when it fired a short-range Scud missile from Wonsan on May 29, which traveled 450 kilometers after peaking at an altitude of 120 kilometers, according to local military officials.

A senior government official in Seoul with knowledge of the May 29 test told the JoongAng Ilbo that Pyongyang had significantly enhanced its target capabilities by attaching a canard and optical equipment of some sort to the projectile, probably a camera or a laser.

A canard is a small wing-like projection that helps a missile steer towards its target. The next day, Pyongyang claimed it had successfully conducted a missile launch using a “precision guidance system.”

The missile launches are a huge blow for Moon, who vowed to deviate from his predecessor Park Geun-hye’s hard-line stance on Pyongyang and adopt a two-track approach that would condemn the regime’s weapons development program while seeking dialogue and promoting exchanges at the private level.

Moon said he was willing to talk with Kim Jong-un, but under the condition that he halts any military provocation.

At least 15 South Korean civic groups gained permission from the Moon administration to engage in private person-to-person communication with the North for coordinating humanitarian programs, but Pyongyang rejected the aid, saying inter-Korean relations had to improve first.

A commentary in North Korea’s official newspaper Rodong Sinmun Tuesday urged Seoul to live up to the inter-Korean peace declarations of 2000 and 2007 while distancing itself from “outer forces.” The declarations, signed between former North Korean leader Kim Jong-il and then-South Korean Presidents Kim Dae-jung and Roh Moo-hyun, state both sides agreed to achieve reunification on their “own initiative.”