Korean races the Namib Desert to help build a well

Korean races the Namib Desert to help build a well 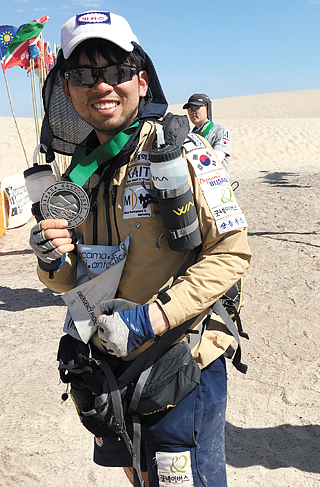 Park Tae-hun, a participant in the desert marathon, holds a medal of completion. [PARK TAE-HUN]

Park Tae-hun, 27, stood in the middle of the Namib Desert in Namibia on the morning of April in 40 degrees Celsius (104 degrees Fahrenheit) heat with a banner waving overhead that read “SAHARA RACE 2017.”

About 120 participants from all over the globe gathered and began the marathon as the gun sounded the start. As Park stepped forward, his feet sank into the hot sand. He carried a backpack crammed with provisions - packets of ramen, yanggaeng (red bean jelly) and nurungji (scorched rice) - a burden for sure, but far less so than the goal he had in mind.

Park is a rookie marathoner who has participated in the 4 Desert Race Series twice, which consists of races in Chile’s Atacama Desert, China’s Gobi, Egypt’s Sahara (although this year’s race was held in Namibia’s Namib Desert) and Antarctica. He requested the sponsorship of companies and crowdfunded on the internet by saying, “If I finish the marathon, please sponsor me to dig a well in Africa.”

How he found himself in Namibia can be traced to a single moment of self-discovery. That is, his discovery last year of a bucket list he wrote to himself as he was preparing to graduate from Dong-A University with a degree in urban planning. One of the items on the list just happened to be building a well in Africa.

“I think I wrote it when my teacher showed us a documentary on the lack of water in Africa during my morality class,” Park says.

Thinking this would be his last opportunity, he thought of fundraising for the well through the completion of a desert marathon.

Hardly an athlete, Park thought it’d be nearly impossible to conclude the 250 kilometer (155 mile) course. For his first marathon, Chile’s Atacama Crossing, last September, he prepared six months in advance by running up a mountain behind his school with sandbags tied to his legs.

In moments of exhaustion, he would re-read the article on Um Hong-gil, who had similarly funded the building of a school through his mountain climbing efforts - a reminder of what he set out to accomplish.

However, Park’s initial Chilean attempt ended in failure. He reached his limits at the 170 kilometer mark of the 250 kilometer course. When he heard from his doctor that he had developed an issue with a ligament in his leg, he held back his tears and returned home.

For another six months he wrote letters to dozens of companies while undergoing treatment for his leg. Whether or not it was due to his previous failure, he was unable to procure any sponsors. In the end, he resorted to Wadiz, an Internet crowdfunding site, and sold his audience on his desire to attempt the Sahara challenge.

The Namibia course was 250 kilometers over seven days. From the first day to the third, he ran or walked 40 kilometers a day. It was another 80 kilometers on the fourth day.

“On the day I ran 80 kilometers, five of my toenails fell out,” Park says. “The temperature that day was over 43 degrees [Celsius] and it felt like a sauna as that section of the course was close to the seashore. After holding water in my mouth, I had to spit it out.”

As many as 16 people dropped out of the race by the fourth day and Park barely completed the race.

He collected 1 million won ($890) in donations through Wadiz for Good Neighbors, a non-profit international relief and development organization, for use in their “Good Water Project” in Zambia for potable water and sanitation.

Park’s plans for the future have now changed. Though he originally sought jobs in a number of contests such as Kakao Stock’s investment stock challenge, he now has his heart set on other priorities.

“Even though I may earn less money, I’ve resolved to work at an NGO or NPO,” Park says.

He made up his mind while journeying in Africa for 15 days after completing the marathon.

“When I rented a small room,” he says, “I was haunted by the scene of seeing 10 Zambian residents crowded in one earthen house with their families eating corn starch bread with raw eggs. Having never attempted a full course marathon before and then having run an ultra-marathon, I felt it in my bones that there is nothing in the world that one can’t attempt.”