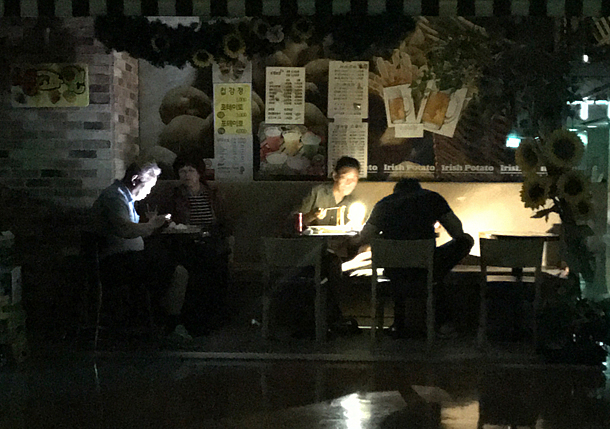 People dine under emergency lights in a restaurant inside Techno Mart in Sindorim, Guro District, western Seoul, on Sunday. A blackout occurred in Guro, Geumcheon and Gwanak districts in southern and western Seoul and Gwangmyeong and Siheung, Gyeonggi, Sunday afternoon, as an electric power substation in Gwangmyeong malfunctioned, according to the Korea Electric Power Corporation. [YONHAP]

Several areas in southern and western Seoul and the neighboring cities of Gwangmyeong and Siheung, both in Gyeonggi, were paralyzed by a sudden blackout Sunday afternoon that lasted for about 20 minutes due to a malfunction in the Yeongseo Electric Power Substation.

No casualties were reported. Seoul’s fire authority said it responded to 54 calls from people trapped in elevators. Roughly 300,000 homes were affected in Gwangmyeong, Siheung, and the Seoul districts of Guro, Geumcheon and Gwanak.

The state-run Korea Electric Power Corporation (Kepco), who operates the substation in Gwangmyeong, issued a public apology and said the problem had been caused by an “operational problem in equipment” at the subsidiary electrical station.

The blackout began at 12:53 p.m. and came mostly under control 21 minutes later by 1:14 p.m. when the power corporation drew electricity from the nearby Shinyangjae substation.

Kepco said the case was “absolutely irrelevant” to the imminent shutdown of the Kori-1, Korea’s oldest nuclear reactor.

At Techno Mart in Sindorim-dong, Guro District, the blackout lasted for about 26 minutes and forced customers to evacuate in the dark. Several people in elevators called 119 for rescue.

Some 200 traffic lights in the Guro area stopped working for about 20 minutes, prompting police officers to control the roads.

The nearby D-Cube Department Store went out of power for about two to three seconds over three occasions Sunday. Lotte Cinema offered refunds to customers. A spokesman for the store said it was able to reduce the blackout time by using a backup power line.

Sindorim Station on subway lines No. 1 and 2 lost power for about five seconds, which a station worker also credited to the use of a second power line.

An official at the Gwangmyeong government office said authorities were trying to gauge damages, adding no serious case has been reported yet, apparently because the blackout happened in broad daylight.

Cho Hwan-eik, president and CEO of Kepco, said in a statement Sunday that his company held “all responsibility” for the blackout and promised to offer speedy compensation for any citizen or work force that suffered as a result. A makeshift damage control center, established at the power corporation Sunday for the specific case, is receiving calls.