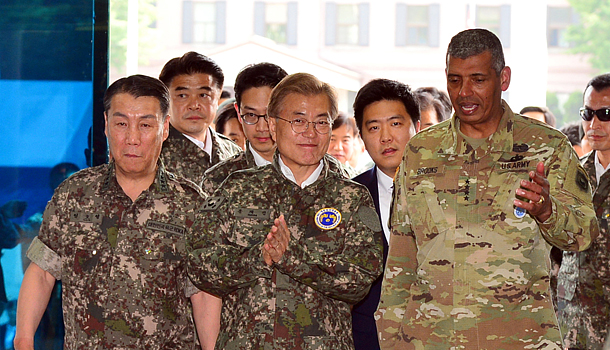 President Moon Jae-in, center, pays a visit on Tuesday to the Korea-U.S. Combined Forces Command and meets with Gen. Vincent K. Brooks, right, the commander of the Combined Forces Command and the U.S. Forces Korea. It was Moon’s first visit to the U.S. Army’s Yongsan Garrison in central Seoul as president. “Korea and the United States are partners that shed blood together for global peace in Iraq and Afghanistan since the Korean War,” Moon said during the visit. “The alliance is going beyond a military alliance to become a comprehensive strategic alliance for military, economy and culture.” [YONHAP]