Learning how to be confident in front of money : Asset manager Yoo Soo-jin offers young women concise tips on how to accumulate wealth

Learning how to be confident in front of money : Asset manager Yoo Soo-jin offers young women concise tips on how to accumulate wealth 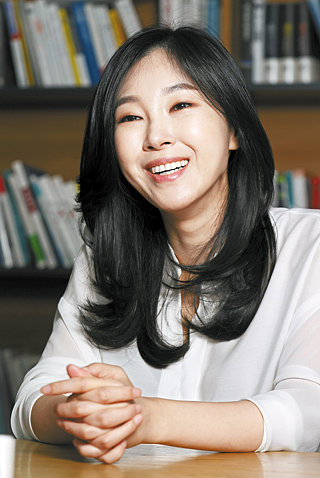 Yoo Soo-jin explains tips and tactics for earning money with short and concise phrases like “Don’t act shy in front of money,” “The rich read the newspaper and the poor watch TV” and “After work, watch documentaries instead of TV shows.” [JOONGANG SUNDAY]

When wealthy people like Donald Trump become best selling authors with books detailing how to get rich, they become even richer. However, the reader who buys the book becomes poorer after spending the money to purchase the book. This is the paradox of books on investing.

Asset manager Yoo Soo-jin, 42, is a rising star in publishing and on the lecture circuit. She previously published books with titles like “Rich Unnie’s Rich Lecture: How an ordinary salaried worker can become rich” and “Rich Unnie’s Rich Practice: A project on how lazy people can become rich.” Unnie, or unni, is a Korean word that literally means elder sister, but is also used to refer to older female friends. These books teach readers everything from how to accumulate seed money to how to read business articles in the newspaper. These two books have sparked both excitement and controversy. Some who claim to be experts in the finance world have even spoken out against the tips provided in the book. Coming from a middle-class background, Yoo has worked at Samsung Life Insurance and is now the breadwinner of her family. Through the years, she has faced both highs and lows. She used to earn 600 million won ($534,000) a year as an asset manager, but she also lost a great deal of the money she earned. After she established an asset consulting company called Ruby Stone, she quickly became a rising star in the field and appeared on many TV shows. In an interview with JoongAng Sunday, an affiliate of the Korea JoongAng Daily, she revealed her thoughts about her book and some tips on how to handle money. 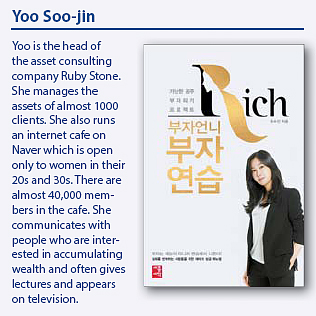 Q. First of all, is there something you would like to emphasize to readers?

A. There are some people who act like they are allergic to words like money and investment techniques. However, money itself is not bad. The way people treat money is the problem. If there are rich people who ponder on how to give back to the society that let them have the wealth they have, I think future generations will be proud.

Why do you think people have to earn money?

What does this book promise?

This book teaches the methods on how to be a capitalist free of wages. Of course, the method to accumulate wealth is painful, but this book minimizes the stress. Learn about how to earn money like its a hobby. If you do so, you will establish a routine where it is the money that earns more money and you get to just stay home.

In your book, there are memorable lines like “Rich people don’t procrastinate” and “What type of woman is more attractive to men? Glamorous women or innocent-looking women? Neither! They prefer women that they have met for the first time.” As a writer, what is the most important line from the book?

The keyword is “Your money grows when you grow.” It takes time to become rich. You have to study hard. Investment revenue results from experience and finding out about what type of investment method best suits you. Some people expect to see revenue the day after investing. However, it doesn’t work like that and it takes time. Money takes time to grow, and in that period of time, you also have to grow.

What does it mean to grow?

When I consult my clients, a lot of them ask me about how to earn money, or what company they should invest in. There needs to be a method for how to save the money after you have earned it. The money you earned is eventually bound to be lost if you do not improve or try to play tricks.

Is what you are saying from personal experience?

Yes. I have both earned and lost money. Older people might think that I am too young to say these kinds of things, but I also have gone through a lot. I know that money doesn’t always stay by my side. When I earned about 600 million won a year, I didn’t even look at the prices on the menu when I ordered food. I didn’t realize how precious money was. Based on my experience, I can say that making a client more money is not the only task of an asset manager. It is also the asset manager’s job to show them how not to lose money. I might not be as reckless as I was when I was young, and there will be days when I will lose money. However, I am not that afraid if something like that happens to me again because now I know how to earn money again.

I don’t have to expect anything from anyone else. I can make a living based on what I have now. However, the most important thing is that I learned how to make money.

The to-do-list mentioned in the book is also notable.

The younger generation, especially women in their 20s and early 30s, have very low self-esteem. I feel this every time I give a lecture, because rarely do any women look me in the eyes when I ask them questions or boldly express their opinions. That breaks my heart. Since they were young, instead of learning how to love themselves, they were raised by mothers who constantly compared them to other kids. Getting a job was not a big problem when I was young, but that is not the case for younger people nowadays. That is why I advise them to write to-do-lists because it gives people the feeling that they have achieved something, even if it might be a small thing. Once your self-esteem grows, it really eliminates unnecessary feelings.

First of all, people in their 50s and 60s should realize that the reality their kids are faced with is very different from what they went through. Accumulating money takes constant effort. Parents should openly talk about money. People in their 50s and 60s were born at a time when Korea was still developing. In comparison, the kids nowadays were born in a much more developed state. The old investment techniques are not valid anymore, and making an investment has become crucial. Parents have to teach their kids about how to invest like how they would teach their kids to ride bicycles.

Is it easy to guess what your clients will be like?

I have been doing this work for about 13 years. Having met numerous clients over the years, I can figure out what kind of person they are just from short conversations. Sometimes, I wonder why even though I give the clients the same information, the results are different.

Is there something you want to say to our readers who are in their 40s and 50s?

People at that age dress similarly to younger people, but they are not open when it comes to investment techniques. Other than that, the lifestyles of people in their 40s and 50s are quite similar to the lifestyles of the younger generation.