BOK on watch as Fed tightens

BOK on watch as Fed tightens 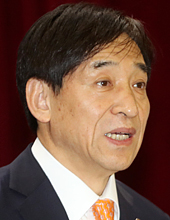 Korea’s financial authorities scrambled to calm the market on Thursday after an overnight decision by the U.S. Federal Reserve to raise its benchmark interest rate sparked fear of a capital flight from the Korean market.

On Wednesday in Washington, the Fed raised its benchmark rate to a range of 1 percent to 1.25 percent, a level that matches with Korea’s record-low rate of 1.25 percent.

The governor of Korea’s central bank and finance minister spent the next day reassuring investors that the change would have limited impact on the local market because the move had been anticipated and Korea’s economic fundamentals remain healthy.

“The U.S. rate hike was in line with expectations, and it will have little impact on the economy,” said Lee Ju-yeol, governor of the Bank of Korea, echoing a view held by the finance minister.

Nonetheless, the central bank held an emergency meeting Thursday to discuss stabilizing measures in case the market fluctuates from capital outflow. The main index, the Kospi, fell 0.46 percent on Thursday to 2,361.65, with institutional investors leading the selling. Foreign investors, though, continued to be buyers.

Lee Ha-yeon, an analyst at BNK Securities, agreed with financial policy makers that a steep capital outflow would not be likely. “When taking into account the fundamentals and recent economic indicators, a massive capital flight won’t be taking place,” she said.

As the U.S. Fed continues its tightening, attention turns to whether the Bank of Korea will follow suit. The central bank faces pressure to raise rates here, but it does so at the peril of expanding already record-high household debt.

“It’s true that the central bank is under increased pressure to raise its benchmark rate,” said Lee of BNK Securities. “But it is unlikely that the bank will raise the rate this year. The new government intends to shore up the economy through a supplementary budget, and the rate hike could be seen as getting in the way of that direction.”

Kim Min-hyung, a researcher at Mirae Asset Daewoo, believes a rate increase could come in the first quarter of next year. “The economic growth is not sufficient enough to warrant an interest rate increase. The Bank of Korea will likely take a while to digest the economic policies of Moon Jae-in’s administration and then execute a rate adjustment in the first quarter.”

The precise timing of a rate hike remains unclear, but there are signs that the central bank is veering toward a tightening stance. Earlier this week, Governor Lee raised the possibility of an interest rate increase for the first time in almost four years.

While he maintained the bank’s intent to accommodate the economy, he also said that “should it become more conspicuous that economic conditions will continue to improve, we may need to adjust the degree of monetary easing.”

Several economic indicators in the past few months, including exports and consumer sentiment, have displayed improvement, prompting the bank to push up its forecast for economic growth this year to 2.6 percent.