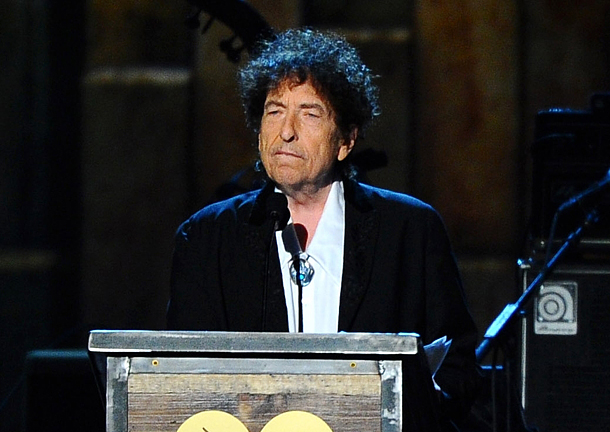 Phrases sprinkled throughout the rock legend Bob Dylan’s lecture for his Nobel Prize in literature are very similar to phrases from the summation of “Moby Dick” on SparkNotes, a study website that’s familiar to modern students looking for shortcuts. [AP/YONHAP]

The whiff of plagiarism is blowin’ in the wind for Bob Dylan.

Phrases sprinkled throughout the rock legend’s lecture for his Nobel Prize in literature are very similar to phrases from the summation of “Moby Dick” on SparkNotes, a sort of online “Cliff’s Notes” that’s familiar to modern students looking for shortcuts and teachers trying to catch them.

The saga began when writer Ben Greenman pointed out on his blog on June 6 that Dylan appeared to have invented a quote from “Moby Dick,” which Dylan discussed in the lecture along with Buddy Holly, “The Odyssey” and “All Quiet on the Western Front.”

Then Andrea Pitzer, a writer for Slate, delved into the supposed quote and wrote in a story Tuesday that the line was not in “Moby Dick” but was very much like a line from the SparkNotes summary of the book.

Here’s Dylan: “Some men who receive injuries are led to God, others are led to bitterness.”

And SparkNotes: “someone whose trials have led him toward God rather than bitterness.”

Pitzer went on to find, and The Associated Press has verified, 20 other sentences with traces and phrases from the “Moby Dick” SparkNotes. She cites no examples in Dylan’s discussion of the other two books, and the AP found none.

The cases Pitzer found are not blatant or explicit - there are no verbatim sentences, only identical phrases and similar phrasing.

Dylan: “Moby attacks one more time, ramming the Pequod and sinking it. Ahab gets tangled up in the harpoon lines and is thrown out of his boat into a watery grave.”

SparkNotes: “Moby Dick rams the Pequod and sinks it. Ahab is then caught in a harpoon line and hurled out of his harpoon boat to his death.”

Dylan: “The ship’s crew is made up of men of different races.”

SparkNotes: “...a crew made up of men from many different countries and races.”

Dylan and spokesmen for SparkNotes and the Swedish Academy which hands out the Nobel weren’t immediately available for comment.

But when Academy spokeswoman Sara Danius posted the Swedish version of Dylan’s speech on her blog on June 7, she described it as “beautiful” and wrote that “the speech is rhetorically complete.”

The AP asked three literature teachers and professors whether they would call out their students for similar work in a paper, and all said they would, if not for the plagiarism, for using the modern equivalent of Cliff’s Notes.

“A high school student would get nailed,” said Joseph Vasquez who teaches English at Rosemead High School in California, “since she should have done the reading, and the closeness of text suggests she didn’t read the text but rather the SparkNotes.”

Dylan has been accused of lifting lines from older artists for his songs in the past, though many fans dismiss it as simply reflecting the common borrowing of the folk-and-blues milieus he drew from. Early in his career, he used the melody of the slave song “No More Auction Block for Me” for his protest classic “Blowin’ in the Wind.” He has since drawn upon other material, sometimes extensively, in everything from his paintings to his memoir “Chronicles: Volume One.”

“It is nothing new that Mr. Dylan might take inspiration from a pre-existing work to prepare something else,” Steven Weinberg, a copyright lawyer and musician, told the AP in an email. “Songwriters, including Dylan, have been borrowing from other literary works to turn pop phrases for ages. Consider Led Zeppelin’s ample use of Tolkien’s classic works in many of their songs.”

Weinberg added the “surprise here is that rather than borrowing from classic literature, Mr. Dylan took his ‘inspiration’ this time from crib notes. But that should not raise eyebrows either. Even John Lennon was known to use things as ordinary as a newspaper clipping or circus posters to embellish lyrics.”

Dylan recorded the 26-minute lecture in Los Angeles and provided it to the Swedish Academy, which called it “extraordinary” and “eloquent” in a news release on June 5.

The lecture is required for the winner to collect the 8 million Swedish kronor ($922,000) in prize money.

He was awarded the prize in October, bringing some controversy that an award reserved for top-flight novelists and poets had gone to a rock star.

He took weeks to publicly acknowledge winning the prize, did not attend December’s Nobel ceremony in Stockholm, and left many wondering whether he would ever provide the traditional lecture. AP