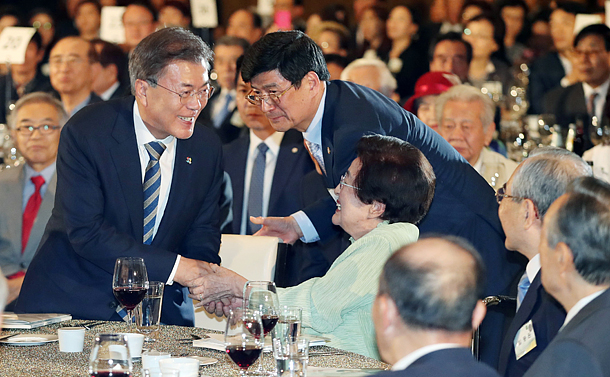 President Moon Jae-in said Thursday he was willing to “sit knee-to-knee, head-on-head” with North Korea to discuss ways to implement the joint inter-Korean declarations promoting peace and cooperation between the two countries, adding that on the key agenda could be normalizing ties between Washington and Pyongyang and the establishment of a “peace regime” on the peninsula.

The statement was laid out in Yeouido, western Seoul, during his congratulatory remarks in a ceremony that marked the 17th anniversary of the June 15th North-South Joint Declaration, signed between former South Korean President Kim Dae-jung and his North Korean counterpart, Kim Jong-il.

It was the first time in 12 years that a sitting president attended the event.

Moon’s remarks were a step beyond his previous stance, whereby he mostly stopped short of saying he would talk with North Korean leader Kim Jong-un if the regime refrained from conducting any additional nuclear and missile tests.

On Thursday, the agenda was specified. The North Korean leader’s most important diplomatic goal is to sign a permanent peace treaty with the United States to replace a 64-year-old armistice and formally end the Korean War. Washington has rebuffed the idea in the past unless Pyongyang fully scraps its nuclear and missile programs, which Kim has insisted will never happen.

Moon called for the legalization of the joint inter-Korean agreements, saying Seoul’s North Korea policy would not have “gone back and forth” had the legislature ratified them.

Moon mentioned four joint declarations in 1972, 1991, 2000 and 2007 to be made law, most of which stress that Seoul and Pyongyang agree to seek reunification independently, apart from any influence from third countries or outer forces. Other agreements include economic cooperation and building mutual confidence by boosting exchanges in all fields.

In the midst of the conciliatory gesture, however, Moon spared no time in pressing the North to denuclearize. “North Korea must give up on developing nuclear weapons and find a way to cooperate with the international society,” he said.

The annual ceremony, organized by the Seoul-based All Korean Committee for Implementation of the June 15 Joint Declaration in South Korea, was held six days after the group rescinded their decision to hold the event jointly with its North Korean counterpart in Pyongyang.

The committee said it had considered “physical and political situations at hand” for their final call to host the celebration separately, but blamed the South Korean government for not officially endorsing the joint project.

It lambasted Seoul’s stance that any humanitarian support to the North and exchanges at the private level would be reviewed within the bounds of international sanctions against the regime, saying, “Private human-to-human dialogue and exchanges must be independent” from any political issues between the two countries.

North Korea ran several articles in its state-run media Thursday that urged the South Korean government to part ways with the United States and draw back its sanctions.

“National independence is a fundament guarantee and a basic principle for the solution of the reunification issue,” the Committee for Peaceful Reunification of the Country of the DPRK, the North’s equivalent to South Korea’s Ministry of Unification, said in a statement, which was issued Wednesday and published in the Rodong Sinmun Thursday.

Inter-Korean relations soured and reached a “total catastrophe due to the U.S. persistently seeking to hinder the Korean nation’s reunification,” the statement continued.

Pyongyang threatened that the South-North confrontation will eventually lead to “physical conflict,” and that by then, both countries would be “compelled to choose reunification [the] non-peaceful way.”

For Seoul to seek peace with Pyongyang, it should not fight for North Korea’s denuclearization because the weapons are the “most dependable and realistic guarantee for peace” of the Korean Peninsula, said the North. Trashing Moon’s “kowtowing to big countries for no good reason,” Pyongyang demanded that Seoul stop siding with Washington by applying sanctions and pressure against the regime.