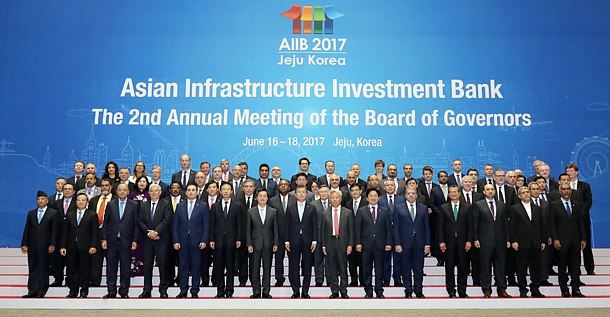 SEOGWIPO, Jeju - President Moon Jae-in on Friday said the Silk Road by land and sea will be completed when South and North Koreas are connected through railways.

“The Korean peninsula is the last stop of Far East Asia but the reality is that the disconnected Gyeongui Line [which once traveled near the Chinese border] issue is still unresolved,” Moon said in his congratulatory speech at the second annual meeting of the Asian Infrastructure Investment Bank (AIIB)’s Board of Governors held at Jeju Island, which runs through Sunday. “I really hope peace on the Korean peninsula will contribute to consolidation and the stability of all Asia.”

This was Moon’s first appearance in a global stage after taking office on May 10.

“I truly believe we can overcome various challenges that we face,” he said, “such as those of politics, national security, economics and the environment through cooperation and solidarity between Asian countries. This is why I have been communicating with a number of Asian leaders by phone and have dispatched ambassadors to places like the Asean, India and Australia.” 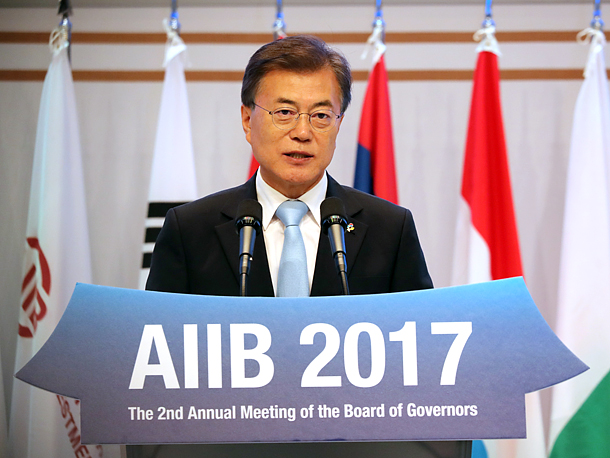 President Moon Jae-in at the opening speech of the AIIB meeting that kicked off in Jeju on Friday. [YONHAP]

Moon also spoke highly of AIIB’s performance and activities in the region.

“AIIB, which was officially launched last year, has done a lot even though it only has been operating about a year and a half,” Moon said. “The bank, which started with 57 members, now has 77 members, and has become a truly powerful international bank. I would like to thank the Chinese government, which led the launch of AIIB, and the bank’s president, Jin Liqun.”

“This year’s event is being held under the theme of sustainable infrastructure and I think investment in infrastructure should also lead to creating more jobs,” Moon said. “Korea’s new government has been focusing on people and creating high quality jobs.”

The newly appointed Korean finance minister, Kim Dong-yeon, gave a keynote speech at the event in which he emphasized the importance of “harmony” to create a sustainable infrastructure.

“Building sustainable infrastructure is not an easy task,” Kim said, adding that investment decisions often focus on maximizing economic benefits at the expense of the environment and that inconsistency between infrastructure policies and economic policies could diminish the impact of investments in general.

“I would like to suggest a word, if I may, that points to the path for solving these challenges: Harmony,” Kim said. “Harmony could lead to an optimal balance among different factors necessary for sustainable infrastructure investment. With the strong commitment of the Korean government, and discussions from this annual meeting, I hope that the bank will be able to solidify its position as an international organization at the forefront of developing sustainable infrastructure.”

Kim, who is the chair of this year’s event, met with AIIB President Jin Liqun on Thursday and promised Korea will make a contribution of $8 million this year for the bank’s Project Preparation Special Fund, which was established to help low-income emerging countries proceed with early-stage infrastructure projects.

This is the first promise made after China said it would contribute $50 million last year. China so far has contributed $30 million.

About 2,000 people attended the meeting, including Jin and representatives from 77 member states, heads of international organizations and financial institutions.