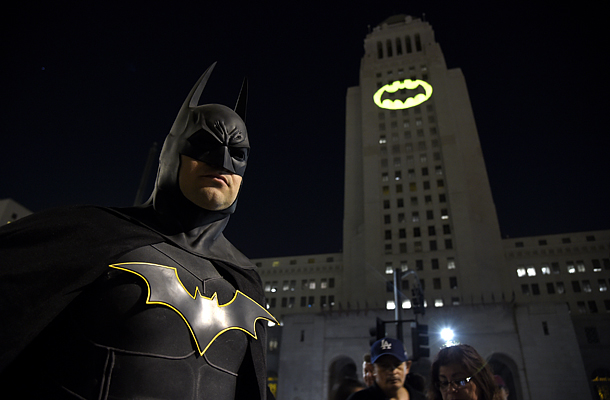 The Bat-Signal is projected onto City Hall in Los Angeles on Thursday night during a tribute to “Batman” actor Adam West, who died last week at age 88. [AP]

Hundreds of fans, some in costume, cheered as Mayor Eric Garcetti and Police Chief Charlie Beck switched on the iconic signal and splashed a yellow oval with a bat silhouette high up on the wall of City Hall.

West, who played the Caped Crusader in the campy 1960s TV series, died last week at 88.

“Like you, we all spent many hours in front of the TV, same bat time, same bat channel,’’ Garcetti told the crowd.

On display was a red Bat-Phone like the one Gotham City’s Commissioner James Gordon used to chat with Batman in the TV series.

Burt Ward, who played Robin on the show, called the actor a “family man.’’

“He loved humanity. He loved his fans,’’ he said.

Before the lighting, people lined up to take photos with two red-and-black, sharp-finned Batmobiles parked on the sidewalk. Some wore Batman masks and others wore capes, T-shirts and hats adorned with the Batman TV logo.

“He’s a legend,’’ said Chad Evatt, a 30-year-old costume designer who made a Riddler costume to wear to the event. “For the longest time he was the only Batman and that’s a position that commands respect.’’

Justin Harrison, 43, wore a Batman costume and said West was not only an actor but someone who “inspired millions.’’