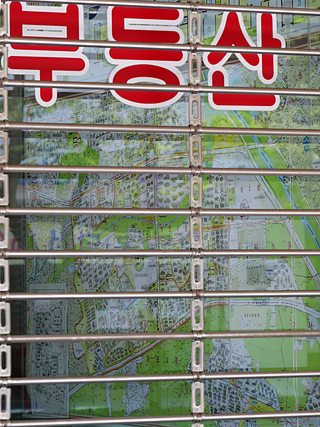 A real estate agency in Gaepo-dong, southern Seoul, is closed on Sunday ahead of the government’s announcement of new real estate regulations set for today. [YONHAP]

The regulations are expected to include tightened loan-to-value (LTV) and debt-to-income (DTI) ratios for mortgage applications, stricter lending criteria and the prohibition of transfer of purchase rights in selected areas.

Realtors in overheated regions such as Gangnam District and Jamsil District, both in southern Seoul, have put their deals on hold as financial authorities ratcheted up their monitoring of speculative property investments and illicit transactions last week.

“We’re not handling new transactions because of the crackdown and strengthened regulation,” said a realtor in Daechi-dong, Gangnam.

Expectations of a tougher stance by the Moon Jae-in administration has already cooled off the market. The average transaction price in Seoul rose 0.32 percentage points in the second week of June, down from the previous week’s rise of 0.40 percentage points, according to real estate information provider Budongsan 114.

“Clients are now very cautious,” said an agent who operates in Daechi-dong.

“They only enquire,” he continues. “The actual deals have been significantly reduced.”

“The [second] week of June was affected by the government’s joint crack down,” said Kim Eun-seon, a researcher at Budongsan 114.

The average sales price for apartment complexes in Seoul under redevelopment was equally stagnant at 0.32 percentage points in the second week compared to the previous week’s 0.71 percentage point increase.

Affluent Gangnam areas that typically enjoy huge demand saw a sharp decline between June 11 and 17 after the Ministry of Strategy and Finance and the Financial Services Commission vowed to concentrate their new efforts on that region.

The price of residential units in Gangnam inched up by 0.23 percentage points, almost half the previous week’s 0.48 percent jump.

The Korea Housing & Urban Guarantee Corporation, a state-run housing finance body, also suspended its guarantees for new homebuyers and builders last Friday out of worries that buyers will flock to the agency.

“There could be excessive signing up for new apartments right before the announcement of any real estate regulations,” said Kim Seong-o, head of an evaluation team at Korea Housing & Urban Guarantee Corporation.

“The suspension period could last two weeks at the earliest or even up to two months,” Kim said.

Although the government said the main target of any new regulations is excessive zeal for real estate speculation, potential homebuyers expressed concerns that they would suffer.

“I am afraid that housing purchases will become even harder because of the regulations and the rise of interest rates on loans,” said Park Joo-hyun, a 35 year old office worker.

“The government should focus on minimizing the fall-out on homebuyers while strengthening rules to detect speculative investments,” said Kim Gyu-jeong, a researcher specializing in real estate market at NH Investment & Securities.