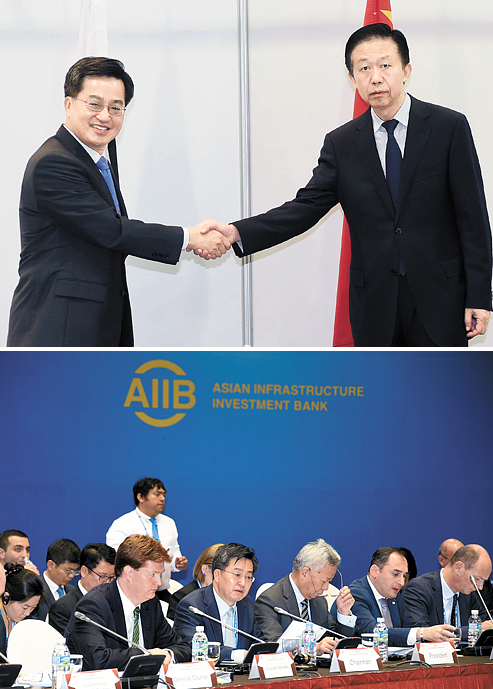 SEOGWIPO, Jeju - Korea successfully hosted the second annual meeting of the Asian Infrastructure Investment Bank (AIIB)’s board of governors, which lasted from Friday through Sunday.

This was the joint debut of President Moon Jae-in and Minister of Strategy and Finance Kim Dong-yeon at the global event, which was held on the southern island of Jeju.

“The meeting was the first global event that the newly elected President Moon participated in,” said Song In-chang, deputy vice minister of international economy at the Finance Ministry. “It also is very meaningful since it is the first time that the bank ran the meeting outside of China.”

One of the most significant events at the three-day meeting was Kim’s Friday meeting with Chinese Minister of Finance Xiao Jie. It was the first time since July 2016 that the two countries’ economic heads have met since diplomatic and economic relations froze over as a result of the deployment of a U.S. missile defense system.

The Ministry of Strategy and Finance said their meeting was scheduled to last only 30 minutes but went on for about an hour. The ministry said it couldn’t disclose details as to whether they discussed sensitive issues like the missile shield.

The ministry did say that the two leaders agreed on strengthening economic ties as this year marks the 25th anniversary of two countries’ normalization of relations.

“Kim and Xiao reconfirmed the strong economic ties between the two countries as this year marks the 25th anniversary of the normalization,” said Choi Ji-young, a director at the Korea’s Finance Ministry. “The two leaders agreed on the importance of the AIIB’s investments in infrastructure for development of the region and to expand their cooperation through the bank as the two countries are major members.”

On Friday, the bank’s board of governors adopted resolutions approving three applicants to join the bank: Tonga, Argentina and Madagascar. That brings the number of member states from 77 to 80.

“Well-integrated infrastructure and enhanced connectivity between Asia and the rest of the world has far reaching benefits for the global economy,” said Jin Liqun, president of AIIB. “Tonga is well known as the Friendly Islands in the South Pacific, while Argentina and Madagascar are important economies in South America and Africa, respectively. I look forward to the role our new members will play once they fully join the Bank.”

The AIIB senior official added that the institution will be open to all countries willing to join it.

“Since launching only 18 months ago, the Bank has welcomed 23 new members from around the world,” said Danny Alexander, vice president of the AIIB. “Interest in the bank remains high and our door remains open to new members that will be joining later this year.”

The China-led AIIB now exceeds the size of the Asian Development Bank, led by the United States and Japan, in terms of member states. Membership of the ADB is currently at 64.

The AIIB announced that its third annual meeting of the board of governors will be held in Mumbai, India, in June 2018. India is the bank’s second largest shareholder and is an increasingly important destination for AIIB investments, the bank said in a press release.

“We appreciate the strong support provided by the Indian government” said Alexander. “It’s fitting that we bring the meeting to India next year, where we can deeply engage with local business and draw on the infrastructure expertise that India can offer.”

Arun Jaitley, India’s finance minister, noted, “We are honored to become the host country for the third AIIB annual meeting. We look forward to welcoming you all to Mumbai next year and making the 2018 event a great success.”

The first AIIB meeting of the board of governors was held in Beijing in 2016.

About 2,000 people attended this year’s meeting, including representatives of 80 member states, heads of international organizations and financial institutions.

The Korea Land and Housing Corporation showcased a Korean version of a smart city and the Korea Expressway Corporation and Korea Railroad Corporation introduced technologies related to highways and high-speed railways.

“Investments in smart cities will be an opportunity for not only emerging countries but also developed countries,” Korea Land and Housing Corporation CEO Park Sang-woo said in an address. “I hope all participants continue to have interest in the AIIB member states and cooperate with Korea.”

The government official added that a dinner event held Friday, which was hosted by Finance Minister Kim, was very successful.

“I really hope the AIIB will become an absolute, influential and important bank,” Kim said at the dinner.

At the dinner, violinist Shin Ji-ah, girl group AOA and others performed.