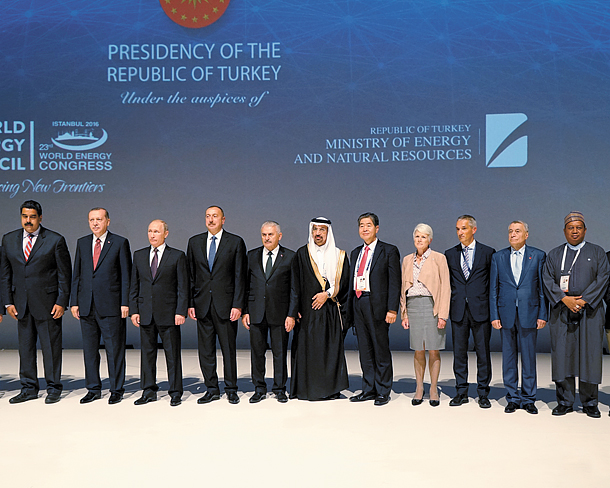 Younghoon David Kim, fifth from right, appears with speakers and guests including Vladimir Putin, president of Russia, third from left, after Kim’s October inauguration as chairman of the World Energy Council in Istanbul. [DAESUNG GROUP]

The World Energy Council is a United Nations-accredited energy body that represents 3,000 member organizations from more than 90 countries.

The institution is “dedicated to delivering a sustainable energy system for the greatest benefit of all.” While largely dominated by representatives from the West in the past, the council is headed by Younghoon David Kim, chief executive of Korean energy company Daesung Group. Kim says his position is part of the grand energy transition that demonstrates the rise of the East in the global energy industry.

“WEC doesn’t represent just one industry or one nation,” said Kim. “It is an organization that looks to facilitate the supply of energy to all mankind.”

“The fact that a person from Northeast Asia has become the chairman of such council shows how important the region is becoming in the global energy market,” Kim added. He is the second representative from Asia elected as the Chairman of the WEC and the first from Northeast Asia.

Suzanna Oh, a former member of WEC’s communications and outreach committee, said China accounts for a quarter of daily total energy demand. Asia as a whole is one of the most rapidly-growing markets for energy. Oh described the phenomenon as the “Easternization” of the energy sector, in which the “global center of gravity is moving to Asia” in terms of “energy consumption and development of new energy.”

According to Enerdata, an energy research and consulting firm, Asia accounted for nearly half of global energy consumption in 2015, some 5,625 million tons of oil equivalent (Mtoe) out of 13,000 Mtoe. China consumed about 3,000 Mtoe while Japan and Korea used 453 and 280 each. China was the top energy consumer that year. Japan was ranked fifth and Korea eighth, according to the data.

“[The appointment of Kim as WEC Chairman] is not a token, not an affirmative action, not just to show diversity,” Oh explained. “It is a natural occurrence, a global energy trend that shows how Northeast Asia is a major energy consumer in the world.”

Kim, who was appointed last year, has the responsibility to set overall policy direction of the institution. And for Kim, the discussion of food and water along with energy is crucial as they are intertwined. “If the price of energy goes up, so will food,” said Kim. “Every process of consumption of food, from production to storage and transportation, require energy.”

“The same analysis can be applied to the relation between water and energy,” Kim added. “Water can generate energy and energy is used to deliver water for everyday consumption.”