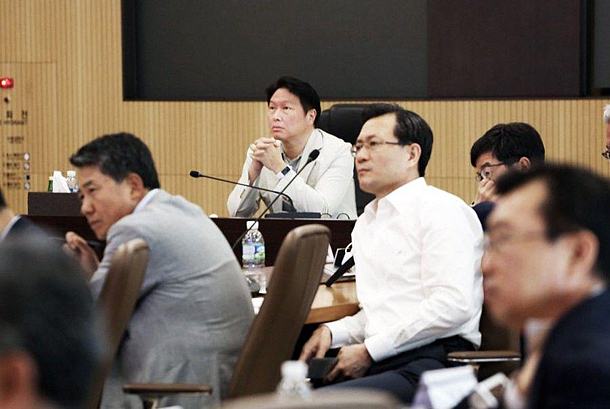 SK Group Chairman Chey Tae-won ordered heads of the group’s affiliates to come up with innovative business models and new portfolios that can raise their competitiveness in a fast-changing era of digitization during a meeting with chief executives on Monday in Icheon, Gyeonggi.

“In the era of the fourth industrial revolution, where different business models and technologies are combined, there are a lot of cases where unexpected resources are born into assets with tremendous value,” Chey said.

In response, the CEOs pledged to transform their affiliates’ business model from the ground up and find new portfolios that can redefine the essence of each company’s business. They vowed to expand partnerships with global companies and invest in research and development.

The company called this year “the beginning of deep change 2.0.”

“Deep change” was the keyword of SK’s CEO meeting held last year and was aimed at promoting aggressive innovation across group affiliates. At the meeting on Monday, the 40-odd executives gathered agreed that last year’s effort was not enough to catch up with global giants, though it did drive the company forward.

“SK Group’s market capitalization has grown by an average 8 percent annually for the past three years to well over 100 trillion won [$88 billion],” said Cho Dae-sik, Chairman of SK Supex Council, the group’s central planning unit. “However, compared to global major players that grew by an annual 30 to 40 percent during the same period, we cannot rest on our laurels.”

“We should look for ways to contribute to the mutual growth of both society and SK by exploiting the tangible and intangible assets of SK,” Chey said, emphasizing that growth with society should be at the core of the company’s “deep change 2.0” vision.

SK has been enjoying a strong year so far, especially in its semiconductor business, which saw revenue surge 72 percent in the first quarter and operating profit climb more than fourfold.

For this year, the group has already proposed investing 17 trillion won, the largest amount ever, to find new cash cows and develop new technologies while hiring 8,200 employees.