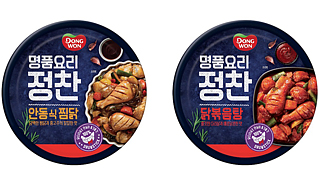 As household sizes get smaller, food manufacturers and retailers are strategizing to target this consumer base, with smaller packages and easy-to-cook products.

Single and two-person households were more than half of the Korean population in 2015 - 27.2 percent and 26.1 percent each, according to Statistics Korea. The government office predicted in April’s report that almost half of Korea’s population would be living alone by 2045.

Unlike big families, this demographic - among which people in their 20s and 30s currently take up a large slice - does not like complicated cooking or filling a table with dishes that require cleaning. Buying food ingredients in the right portion is a burden. This is fueling the market trend for easier and smaller food products.

The brand’s first products are two braised chicken dishes marinated in Andong-style, or spicy, sauce. The cans contain chicken as well as vegetables and noodles. The dishes can be served with rice immediately after opening, without necessarily reheating.

Both are packaged in small portions to weigh 190 grams (6.7 ounces), adequate for a meal for one person. “As they are canned, both meals can be preserved for a long time at room temperature and are also good for outdoor activities like camping,” said the company.

The contents is even smaller than Dongwon - 60 grams per package. This is a little more than a third of the smallest can of tuna, which weighs 150 grams.

Tuna long has been a staple for single adults who eat it with rice. Its ability to be served unheated made it a go-to for those living alone.

The pouch series is also useful for homes with children, as pouches are much easier and safer for them.

More than 100 varieties of vegetables, meat and seafood are packaged in small portions, equivalent to between 10 percent and 40 percent of the usual portions on the store’s shelves. Fish, for example, is sold in cut pieces instead of a whole unit.

Lotte had test-operated micropackaged fresh food since late April and saw sales grow 50 percent from an average 160 to 240 buyers per day in a month.

“As single households increase every year, so is the consumer demand for smaller packaged products that eliminate the possibility of throwing our left over food ingredients,” explained Nam Ki-dae, head of Lotte Department Store’s food merchandising division.