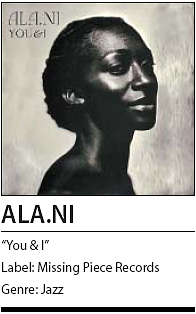 ALA.NI’s sleek, crystalline vocals recount the full cycle of an autobiographical, year-long affair on “You & I,” her alluring debut created in a very determined yet timeless style. A former backing vocalist for Blur, Mary J. Blige and Andrea Bocelli, ALA.NI was born in London to parents from Grenada and is now based in Paris.

Comparisons to Madeleine Peyroux and Lena Horne are reflexive, and the clarity of her singing bears the influence of childhood heroine Julie Andrews. The music sounds as if from decades long past, but her approach feels modern in its own way. With sparse but elegant instrumental backing, ALA.NI’s vocals carry the songs stupendously.

The songs on the album were released on EPs already in 2015, with performances covering one season of the year on each disc, starting with the budding romance in spring on tunes like “Cherry Blossom” and reaching a winter conclusion with “Circle” and its promise of a new start. In between, there’s hope he will choose her over his wife (“One Heart”), the amicable goodbye (“Darkness at Noon”) and deeply ingrained memories (“I’ll Remember”).