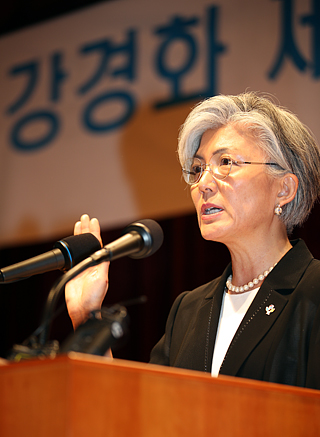 Newly-appointed Foreign Minister Kang Kyung-wha takes the oaths of office at the Foreign Ministry in central Seoul on Monday. [YONHAP]

Seoul will use sanctions and dialogue to lead North Korea toward denuclearization, said Kang Kyung-wha, Seoul’s new minister of foreign affairs, in her inauguration speech Monday.

“The international situation we face is more serious than any time before,” Kang said at the Ministry of Foreign Affairs in central Seoul, after taking the post as South Korea’s chief diplomat the previous day. “We need to take ownership of the ever-advancing and urgent North Korean nuclear and missile issue, which threatens the safety of our people, and actively work toward tackling it.”

She continued, “We need to respond sternly to provocations while employing all methods, including sanctions and dialogue, to lead North Korea toward denuclearization. In this process, we need to further strengthen the South Korea-U.S. alliance, the backbone of our diplomacy and security.”

Kang went on to address the direction she will take regarding diplomatic ties with Seoul’s closest neighbors amid tensions with China over the deployment of the Terminal High Altitude Area Defense (Thaad) antimissile system and continued tension over history issues with Japan.

She said issues with China need to be “resolved in a wise manner, and the two countries’ relationship should be advanced.”

On Japan, she said “historical issues have to be faced” while the two countries strive toward a “future-oriented, mature cooperative partnership.”

She added, “cooperation with Russia has to be expanded” and that the two countries’ relationship “needs to be advanced more substantively than before.”

Kang, Korea’s first female foreign minister, also emphasized innovation, reform and communication, calling for a “country that is like a country,” as advocated by President Moon Jae-in.

“More than anything, I believe that the diplomacy this era demands is a diplomacy that reflects the will of the people and communicates with them,” she added. “We need to humbly look back on whether the Ministry of Foreign Affairs has put enough effort into listening to the voice of the people and informing the public in detail about our diplomatic policies.”

Moon appointed Kang as foreign minister Sunday despite the objection of opposition parties over various ethical breaches, including the use of a fake address to allow her daughter to attend a school of her choice 17 years ago.

Kang told reporters later that she plans to focus first on preparing for the upcoming summit between Moon and U.S. President Donald Trump in Washington at the end of the month.

She is also in the process of scheduling first calls with her counterparts in the four major countries - China, Russia, Japan and the U.S. - adding, “the phone conversations will take place as soon as scheduled.”

In response to concerns over relations with Tokyo, especially over the issue of Japan’s wartime sexual slavery and the so-called comfort women agreement of 2015, Kang said, “The president has said that countries’ relations should not be shackled because of historical issues. It is not right for one issue to regulate two countries’ relations, and we will continue to communicate on this issue while cooperating on economy and other issues.”

She also assuaged concerns that South Korea might be shifting position on its support of UN resolutions regarding North Korean human rights.

“In regard to the North Korea human rights issue, as a human rights expert who understands the expectations of the international community from South Korea, I believe we should fundamentally maintain our position supporting the UN human rights resolutions on North Korea since 2008,” said Kang, a former senior adviser on policy to the UN secretary general.

The Foreign Ministry also said that Kang held a telephone conversation with UN Secretary-General Antonio Guterres and former chiefs of the United Nations, right after her appointment Sunday. Kang told Guterres that Seoul will work with the United Nations to resolve the North’s nuclear and missile problem and improve the human rights situations there and further requested the UN secretary general’s interest and support.