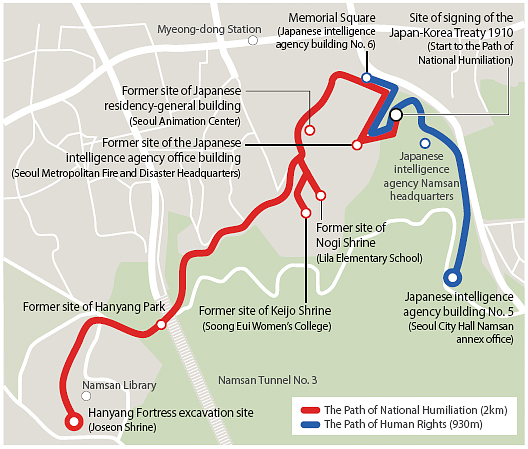 As part of a dark tourism project, a physical path to remember the country’s history of annexation by Japan will be established by the Seoul city government, set to open from August next year.

“The two paths, tentatively named ‘The Path of National Humiliation’ and ‘The Path of Human Rights,’ will be established in and around the foot of Mt. Namsan in central Seoul,” said Ahn Jong-wook, an official of the Public Regeneration Division of the Seoul Metropolitan Government. “The city government will begin necessary renovation work this year to open the two paths to the public in August of next year.”

The path tentatively named the Path of National Humiliation will stretch some 2 kilometers (1.2 miles) from the site where the annexation treaty was signed between Japanese Governor General of Korea Terauchi Masatake and pro-Japanese Korean Prime Minister Lee Wan-young in 1910, now located close to the Seoul Youth Hostel in central Seoul.

It will continue to Seoul Animation Center, where the building of the Japanese Residency-General was located; Lila Elementary School, where a shrine dedicated to Japanese General Nogi Maresuke used to stand; Soong Eui Women’s College, where another Japanese shrine was located; now-defunct Hanyang Park, which was built by Japan during the annexation period; and to an excavation site of the Hanyang Fortress, where used to stand the Chosen Shrine, a first of a series of imperial shrines built by Japan during the annexation period in Korea.

“The project will help people reckon with a humiliating past of this country,” Ahn said. “We hope that the paths will be educational sites for this country to never repeat the same mistakes of its past.”

The city government will also create a memorial square and a museum to connect with the so-called Path of Human Rights. On the first floor, visitors can learn about the history of Korea via documentaries and other media. On the basement floor, city government intend to recreate interrogation rooms like the ones used by Japanese intelligence agencies in the past.

The city government will also create a 5,000 square-meter (53,820 square-foot) forest near the pathway.

The two paths, which intersect in some areas, will take visitors some two and a half hours to complete.

“With the additional renovation of the pedestrian roads from Myeong-dong in central Seoul to Mt. Namsan, which will also finish around August next year,” said Jin Hee-seon, head of the Urban Space Improvement Bureau of the city government, “the two historical pathways will be a huge attraction to visitors.”