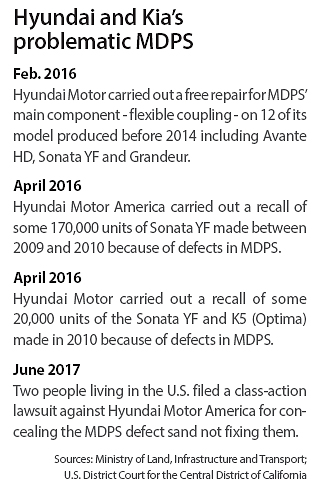 Hyundai Motor and Kia Motors’ motor-driven power steering has come under fire again as two U.S. residents filed a class-action lawsuit against the carmaker’s local unit after getting into accidents while driving Hyundai vehicles.

MDPS is an electric steering system that’s designed to help the driver turn the steering wheel more easily by installing an electric motor in the system.

Hyundai Motor and its smaller affiliate Kia Motors have been implementing MDPS in their entire small and midsize car lineup since the early 2000s.

Houston Vinci, who bought a used 2013 Hyundai Accent in 2015, said she experienced “repeated problems with the power steering system” in the complaint filed to the U.S. District Court for the Central District of California along with Jaehan Ku, who drives a 2013 Hyundai Elantra, the local name for the Avante.

Because of the failure in the steering system, Vinci was involved in an accident last year, the complaint said.

Ku, a Korean resident in Oregon on a student visa, said he was in a crash last year because of a defect in the car’s steering system. The steering wheel “locked up” and “veered sharply to the left... before crashing into the Jersey barrier on the side of the highway,” he said in the filed complaint.

The two plaintiffs said Hyundai Motor America didn’t notify the government or consumers although the Korean automaker was “fully aware of the defects in its steering mechanism,” citing more than 100 complaints made to the National Highway Traffic Safety Administration (NHTSA) regarding similar steering mechanism issues. The models in question are the Elantra compact sedan and Accent subcompact car made between 2013 and 2016.

A spokesperson at Hyundai Motor’s Seoul headquarters said the company hasn’t received the complaint yet, adding that it would proceed properly once it gets it.

This is not the first time Hyundai and Kia’s vehicles have come under fire for the MDPS in their vehicles, which are sold in both the domestic and overseas markets.

After a Korean television program released last year several black box footages and interview clips of Korean drivers who nearly got into an accident or crashed due to malfunctioning MDPS, the nation’s top two auto companies started dealing with the issue.

In Korea, it initially carried out a free repair service on Hyundai vehicles, replacing what’s called flexible coupling, one of the main components of MDPS, claiming they might generate “unnecessary noise due to abrasion.” But it also added a note saying the car’s steering wheel may become heavy or slant to one side when another component called the torque sensor installed inside the MDPS notices irregularities on the road or wheel alignment.

The affected models included some of Hyundai’s top-selling cars like the Avante HD, Avante MD, i30, Sonata YF, Sonata YF Hybrid and Grandeur.

In April, Hyundai and Kia said it would recall 20,000 units of the Sonata YF and K5, known overseas as Optima, because of a faulty ECU equipped in the MDPS. A recall process puts a heavier burden on the carmaker because it has to guarantee the drivers free repairs for an unlimited time. It has to compensate those who fixed the problem on their own before the recall. Hyundai said the circuit board of the ECU wasn’t properly coated, which makes it vulnerable to water, leading the steering wheel to eventually “get heavy.”

The affected models included the Sonata YF manufactured between January and July 2010 and the K5 or Optima produced in May and July 2010.

The K5 is one of Kia Motors’ flagship volume models for both the domestic and overseas market. In 2010, Kia Motors manufactured 85,646 units of the K5 at its Gwangju factory and exported 23,683 of them.