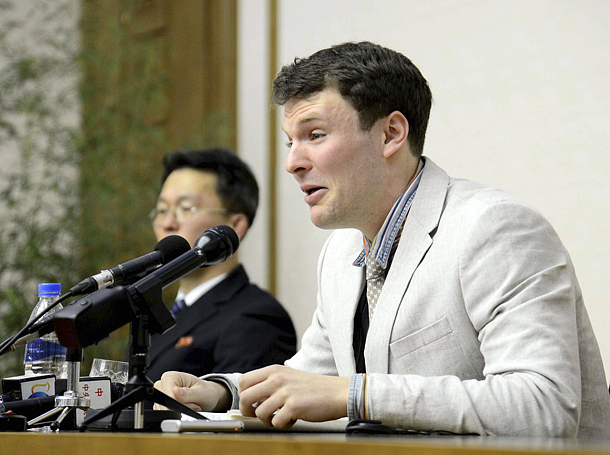 In this Feb. 29, 2016, photo, American student Otto Warmbier cries while speaking to reporters in Pyongyang, North Korea, after being convicted of stealing a banner from a hotel. Warmbier died Monday, relatives said in a statement. [AP/YONHAP]

Otto Warmbier, the 22-year-old American college student who was released by North Korea last week in a vegetative state after 17 months of captivity, died Monday in Cincinnati, Ohio, his family said.

He has “completed his journey home,” relatives said in a statement, according to the Associated Press. “Unfortunately, the awful, torturous mistreatment our son received at the hands of the North Koreans ensured that no other outcome was possible beyond the sad one experienced today.”

The family has yet to describe the exact cause of the death.

While expressing his “deepest condolences” in a statement issued through the White House, U.S. President Donald Trump said, “Otto’s fate deepens my administration’s determination to prevent such tragedies from befalling innocent people at the hands of regimes that do not respect the rule of law or basic human decency.”

The U.S., he continued, once again “condemns the brutality” of the North Korean regime.

In a carefully worded statement, South Korea’s President Moon Jae-in said he planned to send a letter of condolence to Warmbier’s family and raised doubt as to whether North Korea had been transparent about the detention.

“During an interview with a foreign media outlet yesterday,” Blue House spokesman Park Soo-hyun said Tuesday in a briefing, “President Moon questioned whether North Korea had fulfilled its humanitarian obligation of informing Warmbier’s family about his deteriorating state and providing the needed top-notch medical treatment.”

Park was referring to Moon’s interview with CBS This Morning, his first U.S. broadcast television interview since his election on May 10, which was conducted earlier this week but hasn’t been aired yet.

Moon said it was “terribly deplorable” that the regime did not respect universally shared values of human rights, according to Park, and vowed to push the government to “do whatever it can” to safely bring back South Korean and U.S. detainees.

Three other American nationals, one Canadian and six South Koreans remain in custody in North Korea.

In a cabinet meeting, Prime Minister Lee Nak-yon said Tuesday that North Korea had an “obligation” to explain what had happened to Warmbier in its country. The regime’s explanation that Warmbier fell into a coma after being poisoned by food was “doubtful,” added Lee, who said that the case was “regretful.”

American doctors who treated Warmbier, a student at the University of Virginia, said he had suffered “severe neurological injury.”

Doctors with the University of Cincinnati Medical Center, where Warmbier was taken on the night of June 13 upon his arrival in Ohio, said he had severe damage to all regions of his brain and was in a state of “unresponsive wakefulness,” according to the AP.

No evidence of botulism, a rare illness caused by a toxin, was found.

North Korea told American officials that following his trial in March 2016, Warmbier became sick with the illness and slipped into a “coma” after being given a sleeping pill.

Unresponsive wakefulness, also known as being in a vegetative state, is not the same as a coma, in which the patient is not awake.

Warmbier’s family said they were told by North Korea through U.S. government officials that he had been in a coma for more than a year, though they only learned about that condition last week.

In a terse statement, North Korea said on its state-run Korean Central News Agency last Thursday that Warmbier was released on “humanitarian grounds.” No other response has been released since.

Warmbier’s death will further strain Pyongyang-Washington relations, at a time when the regime has been threatening to test-launch an intercontinental ballistic missile long enough to reach the U.S. mainland.

Washington had offered dialogue but only on the condition that North Korea completely denuclearizes.

The case is even more difficult for President Moon, who endorses a softer approach to the North than offered by his predecessor Park Geun-hye, and suggested dialogue with the North if it halts any additional testing of nuclear bombs or missiles. Moon did not describe a timeline for his suggestion.

The last time North Korea carried out a missile test was on June 8, when it fired several short-range antiship cruise missiles off its eastern coast, which flew about 124 miles before landing in the East Sea. The most recent nuclear test was in September 2016.

North Korea hasn’t directly responded to Moon’s dialogue proposal but urged the South to distance itself from the U.S. and stop criticizing its nuclear weapons, which it claimed to be the “most dependable and realistic guarantee for peace” on the Korean Peninsula.

Moon will fly to Washington next week for a summit meeting with Trump on June 29 and 30. A South Korean government official admitted that Warmbier’s case “could have significantly lubricated North-U.S. relations had he awoke” from his vegetative state, but because he died, will “work against that prospect.”