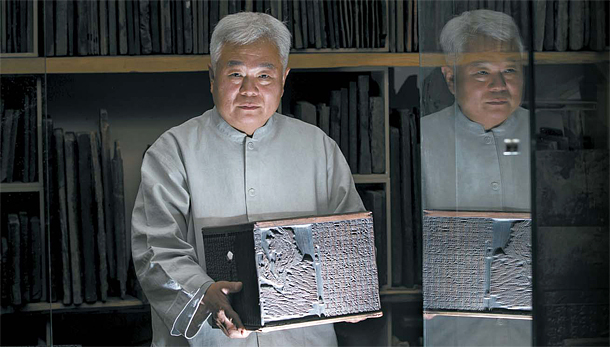 Han Seon-hak, the director of the Woodblock Prints Museum and the chief monk of the Myeongju Temple, holds the woodblock of Oryunhaengsildo, made in 1797, at his museum in Wonju, Gangwon. The woodblock was cut into a square during the Japanese Colonial rule to fit into a mini fire pot. [KWON HYUK-JAE]

Situated in a tranquil alcove of Mt. Chiak in Wonju, Gangwon, sits Myeongju Temple, a Buddhist temple built in 2004. Yet, rather than attracting visitors seeking the respite of a temple, it’s known more as a museum. In fact, it is home to the only Woodblock Prints Museum in Korea.

Even though the museum is located 600 meters (1,969 feet) above sea level, more than 12,000 people make the trek up the mountain to see what is on display every year. Especially for those interested in Buddhist art, Myeongju is the place to go.

“Our collection of some 6,000 pieces of woodblocks, prints, scripture and other artifacts don’t lag behind those in China or Japan, neither in quantity nor quality. We have become well-known enough to found the International Woodblock Research and Conservation Association,” said Han Seon-hak, the director of the Woodblock Prints Museum and the chief monk at the Myeongju Temple.

While Han lives his life as a Buddhist monk, he grows his hair out, (monks typically shave their heads) is married and has children.

Han follows the Taego order, one of the three major Buddhist orders in Korea, which also includes Jogye and Chentae, which deems the issues of private property and marriage personal matters to be determined by individual monks themselves. Han’s second career as a museum director came unexpectedly, when he bought his first statue of Buddha in 1996.

In the middle of the temple’s garden stands a tall stone, engraved with a passage from the Jabbo Janggyeong, a book of ancient Chinese Buddhism scriptures written in the late 5th century: “Be not proud in advantage and servile in disadvantage… Fear as a deer, be as fierce as a tiger.”

Ahead of the Special Rubbing Exhibition - World Buddhist Art starting on June 25, the JoongAng Ilbo, an affiliate of the Korea JoongAng Daily, sat down with Han. The following are edited excerpts of the interview. 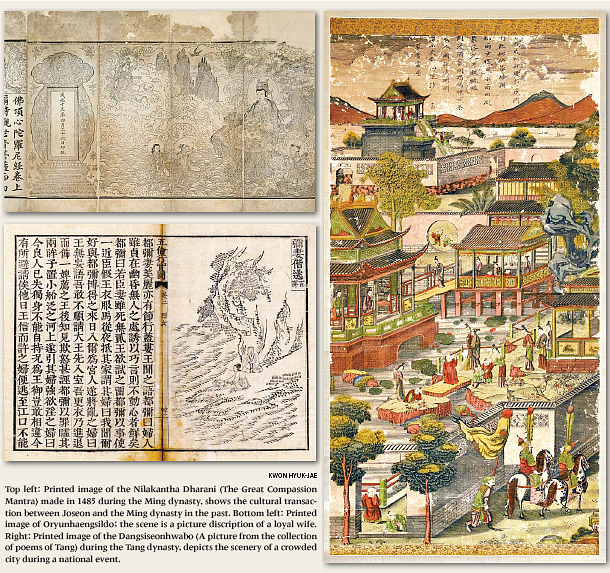 Q. What do the passages on the stone mean to you?

A. Those lines are some of my favorites. They explain the principles of the world in a very simple way. I wish I could act out even just the first two lines. [Referring to the scripture,] I collected the artifacts with such desire, and I pray I may come to be enlightened in such a manner, but I’m not sure if I’ve done well. I started this because I liked it, because I went crazy over it, and I am giving it all I have.

What do you mean you went crazy over it?

I have dedicated my life to it. My collection got bigger with each piece and I realized what is meant by the phrase ‘you go crazy when you go crazy’ (the title of a Korean novel on the intelligence of Joseon). Collecting is the strongest of all addictions. It’s said to be worse than drug addiction. It’s as if it’s the very last obsession of a human being. Buddhist teachings are all about non-possession, and at times I wondered if it was okay for me to be holding on to materials as a monk.

Are you now free from the contradiction of collecting things as a monk who has to let go?

Buddha taught us that all pains come from possessing, and that opposites are alike. The important thing is to walk the middle path. A strong obsession is like letting go. Now I can let everything go. You can’t carry them after you’re dead anyway. I’m just happy that I was able to pioneer the deserted field of woodblock prints. Of course the collecting is still ongoing. A museum always has to show something new.

How often do you hold special exhibitions?

On average, about three times a year. It’s really not common for such a small museum to hold steady exhibitions. But the point of the collection is to show it. To put it vulgarly, you want to show it off. That’s why you build a museum. Then that becomes education, it becomes experience. Piling it up for just yourself to look at is greed. In 2010, I obtained a Ph.D. in museum education from Hanyang University to gain professional knowledge [about running a museum].

What do you mean when you say, “Go to a museum if you want to get rich?”

It’s the thing I emphasize to all my visitors. Look at the world now. Even if you don’t know English or mathematics well, you can make millions with a good animated character, like Pororo, the most famous animated character in Korea. Where would such ideas spring from? The first is the library, the second is a museum. I call them the power plants of creation. Creation doesn’t just drop from the sky. It begins with imitation. The more you visit a museum, the more stimulation you get.

Do you think it’s okay for a temple to also run a museum?

It’s the age of culture. Twenty-first century Buddhism should be able to embrace [modern] culture. It has to put the culture in the center of its missionary work. We opened a printing class when we opened the museum, and we started a temple stay business in 2011. I see all of this as dana (Buddhist alms). Sharing doesn’t always have to be materialistic.

What’s so meaningful about woodblock prints?

Woodblock prints are the fruits of printing culture. It would be the pop culture of the contemporary era. It is the very concentration of Buddhism, Confucianism and other traditional beliefs shown in pictures. People would print mass quantities of the original and share it with many people. The woodblocks vary from wooden Neunghwapan used to print the front covers of ancient books, paper for the ancient intellects to write their letters on, to woodblocks used to print talisman charms popular among the public.

They have so much potential to be used in modern times, as their design elements are very powerful. Simply put, they are treasure troves of content. If our museum used the ideas within the artifacts, we could come up with thousands of design contents.

How did you come to become a monk?

It all started back in 1978 when I passed the exam to become a commissioned officer. I liked art as a child, and I got into Dongguk University’s Buddhist arts department as a sculpting major the same year, after failing the entrance exam three times. I was called to serve my military service in May of that year, but you were able to put off the service period if you were a preparatory monk. So I left home to enter the Buddhist priesthood in late 1981 at Yangyang Naksansa Temple, Gangwon, and enlisted as first lieutenant in 1983. I served 15 years in the army until I was promoted to lieutenant colonel in 1998. A chance choice completely changed my life.

Why did you leave the Jogye Order?

I got married when I was in the army. Back then, the Jogye order only allowed for monks within the army to get married. If I was to remain in the Jogye order, I would have to leave my wife. I couldn’t do that. So I left the army, settled down and built a temple here, and opened a museum in 2003.

How did it all start?

In 1996 when I was the chief monk of the temple within the army grounds, I went on a pilgrimage to the Jiuhua Shan Temple in Anhui Sheng, China. In a nearby antique market in Hangzhou, I bought a statue of Buddha to put on the shrine of the temple for 35,000 won ($31). When I came back to Seoul, I saw that a similar kind of statue cost more than 10 million won.

My eyes were opened to collecting. I bought a Ksitigarbha Bodhisattva woodblock in Insa-dong, central Seoul, for 10,000 won. It’s the first piece of my collection. From then on, I travelled across China, Tibet, Mongol, Korea and Japan to grow my collection.

Didn’t it cost a lot?

The situation changed dramatically two years later in China. I realized that this might be the only chance I was going to get. I didn’t have a lot of money in my hands, but I combed through the antique shops in Insa-dong, Janghanpyeong, Dapsimni and near the Cheonggye stream and got information from merchants who travel around China. Chinese artifacts used to cost 10,000 won, but the prices became 100 to 200 times more expensive. Korean artifacts have become cheaper, though.

Could it act as a sort of an investment?

It’s an investment only if you sell it on, and this isn’t like that. One day, I’ll give this away to someone and end my life in the Himalayas. There was a time when the people of Insa-dong would gossip about how a strange monk was buying worthless Chinese woodblocks, but now they tell me I had foresight. Of the 300 pieces of woodblocks recorded in the Chinese Buddhist Printing Collection published in China three years ago, 100 of them are owned by our museum.

How would you describe this exhibition?

The exhibition shows the global heritage of rubbing artifacts such as those from Longmen Shiku in China, Angkor Wat in Cambodia and Seokguram in Korea. This autumn, we’ll host the 8th World Woodblock Festival. I started out like a blind man feeling around the elephant’s trunks, but I’ve come to accomplish so much in the last 20 years. I have properly started to live the life of a Buddhist monk after opening the museum. When I initiated my life as a monk 34 years ago, the great monk told me to save people from all over the world; I feel I may have come closer to living by those words.