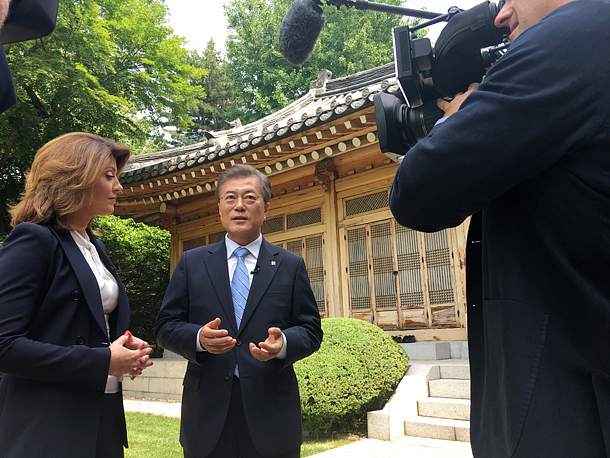 President Moon Jae-in conducts an interview with “CBS This Morning” on the Blue House grounds on Tuesday. [YONHAP]

In advance of next week’s summit with U.S. President Donald Trump, President Moon Jae-in is trying hard to ease concerns about disharmony in their approaches to North Korea and other sensitive security issues.

Moon met with Richard Haass, president of the Council on Foreign Relations, at the Blue House on Wednesday. Earlier this week, Moon had interviews with the Washington Post and CBS and discussed his North Korea strategy.

“Moon met with Haass this morning at the Blue House and discussed the Korea-U.S. summit in one week and other issues concerning the advancement of the Korea-U.S. alliance,” Park Soo-hyun, presidential spokesman, said.

“At the meeting, Moon assured Haas that the alliance is the fundamental basis of Korea’s diplomacy and national security and that Korea will continue to strengthen cooperation based on close communication and consultation.”

Moon also asked Haass to spread a positive message about the alliance in Washington, Park said. Haass is a veteran foreign policy maker for both Bush administrations and Trump has publicly expressed respect for him.

A series of diplomatic trip-ups has preceded Moon’s summit with Trump on June 29 and 30. Controversy has flared over Moon’s order for an environmental study that effectively delayed the completion of the U.S. deployment of the Terminal High Altitude Air Defense (Thaad) antimissile system.

Moon’s long term plan to engage Pyongyang more than the previous two administrations was dealt a blow this week when an American student, Otto Warmbier, died days after his release from 17-month of captivity in the North.

Moon addressed these issues during his interviews with U.S. media.

“After Moon said he is willing to have talks with the North without any conditions if the North stops nuclear and missile provocations, misunderstanding grew in Washington that it is Seoul’s policy to have unconditional talks with Pyongyang,” a Korean government official told the JoongAng Ilbo. “To clear up the misunderstanding, the president is personally giving straightforward messages by having interviews with U.S. media.”

“The engagement that I am talking about is actually very similar to the engagement that President Trump is talking about,” Moon said in his interview with Washington Post. “He has put the resolution of the North Korean nuclear issue at the top of his priority list, and he has employed a tactic of maximum pressure and engagement, but engagement [can only occur] if the conditions are right.”

Moon said Korea will be in close consultations with the United States when pursuing dialogue under the right conditions, adding that Korea should play a larger and more leading role in this process.

“President Trump and I have a common goal - that is the complete dismantlement of North Korea’s nuclear program and the denuclearization of the Korean Peninsula,” Moon said. “In the process of working toward that common goal, the friendship and trust between the two of us will be very important. I hope we will be able to show the world that the collaboration between our two countries is strong and will continue to grow stronger.”

In the interview, Moon also presented his proposal to resolve the North Korean nuclear crisis. “It is urgent for us to freeze North Korea’s program so they will stop additional provocations and stop advancement of its technologies,” he said. “I believe during my upcoming summit meeting in the U.S. I will be able to discuss a two-phased approach to the North Korean nuclear issue - the first being a freeze and the second being complete dismantlement.”

He dismissed concerns that his order for an environmental study on the Thaad site was to delay or eventually scrap the deployment agreement between Seoul and Washington. “Getting the environmental impact assessment does not mean that we will postpone or reverse the decision to deploy,” Moon said.

According to presidential spokesman Park, the Thaad issue was also discussed during Moon’s meeting with Haass on Wednesday. Haass, scheduled to visit China today, told Moon that he will tell China that the Thaad system is to protect the South from the North’s missile threats and China should not be concerned about it. China has bitterly criticized the deployment.

In an interview with CBS News of the U.S., Moon praised Trump for placing North Korea on the top of his priority list and said he believes Trump’s greatest diplomatic achievement could happen on the Korean Peninsula.

“The two of us will be both in office and working together for the next five years. And the two of us also share the common goals of resolving the North Korean nuclear issue, establishing a peace regime on the Korean peninsula, and building peace and security in Northeast Asia,” Moon said. “So, if the two of us could pull together and accomplish these common goals, then I believe that this will be the most fruitful achievements that we can achieve during our terms in office. And I also believe that this will be the greatest diplomatic achievements for President Trump as well.”

Moon also tried to ease angry reactions about his special adviser’s remarks in Washington last week, claiming that he is an academic and was merely stating his personal views.

In the interview with the Post, Moon also tried to dismiss skepticism that his security team is willing to sacrifice the alliance with the U.S.

“As a sovereign state, we should have operational command of our forces returned to us at an appropriate time. Korea and the United States have already reached an agreement where we will receive operational control of our forces when the conditions are met,” he said. “I would like to add that Korea and the U.S. have maintained a combined forces command system for a long time. Even if [we] were to get operational control back, as long as this combined system is maintained, our countries will continue to have combined security and U.S. forces will continue to play their part in our security.”