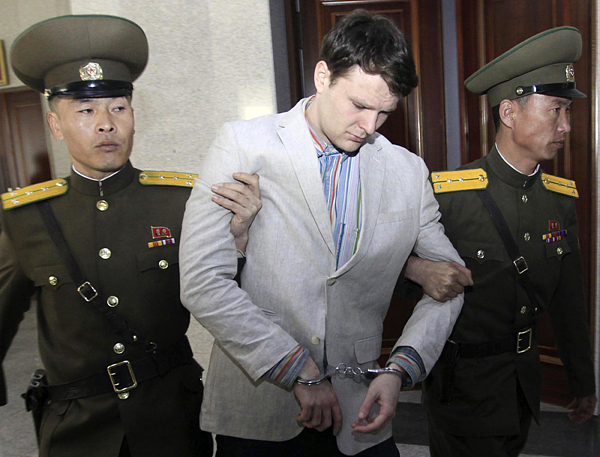 In this March 16, 2016, file photo, American student Otto Warmbier, center, is escorted at the Supreme Court in Pyongyang, North Korea. The death last week of American student Warmbier, who fell into a coma after being arrested in North Korea, has raised questions about whether his tour agency was adequately prepared for its trips into the hard-line communist state. [AP/YONHAP]

North Korea's ambassador to the United Nations claimed that his country follows "national laws" and "international standards" in its treatment of detainees, excoriating a UN humans rights expert's request that Pyongyang clarify why Otto Warmbier was released in a vegetative state as "unacceptable and distorting realities."

It was North Korea's first comment on its foreign prisoners since Warmbier's death. The 22-year-old American national had died on Monday in Cincinnati, Ohio, six days after his release from the North. He was detained for 17 months on charges of subversion.

"We are doing according to our national laws and according to international standards," Han Tae-song, the North Korean envoy, said during an interview with Reuters in Geneva on Tuesday.

When asked about his thoughts on the possibility of the United States and other countries imposing wider sanctions on the North in reaction to the Warmbier case, Han reportedly answered, "My country has been under sanctions for more than 60 years by Americans."
He added, "I don't know what kind of sanctions they are going to impose on us, but we are not afraid."

Han declined to comment specifically about Warmbier or the fate of any other foreigners held captive in his country — three Americans, one Canadian and six South Koreans.

Before the Reuters interview, all North Korea had said on Warmbier since his release from Pyongyang on June 13 was that he was sent back home on "humanitarian grounds."

The American college student was sentenced to 15 years in labor prison in March 2016, two months after he went to North Korea as a tourist and allegedly was caught trying to steal a political banner from a restricted area within his hotel.

American doctors who treated him said he had severe damage to all parts of his brain and that he was in a state of "unresponsive wakefulness." No evidence of botulism, a rare illness caused by toxin, was found.

North Korea had told American officials that following his trial, Warmbier became sick with the illness and slipped into a "coma" after being given a sleeping pill. A coma is not the same as unresponsive wakefulness.

"His remarks are unacceptable and distorting realities," Han told Reuters when asked about two separate statements issued last week by Tomas Ojea-Quintana, the UN special rapporteur on human rights situations in North Korea. "This is what we expected from him. As I said earlier," said Han, Ojea-Quintana is "the model servant of the hostile forces."

Ojea-Quintana said last Friday that Warmbier's case was a "reminder of the disastrous implications of the lack of access to adequate medical treatment for prisoners" in the North.

The onus is on the North Korean government to clarify the causes and circumstances of the release, the expert continued, saying his "ordeal could have been prevented had he not been denied basic entitlements when he was arrested, such as access to consular services and representation by an independent legal counsel of his choosing."

In another statement issued on June 13, Ojea-Quintana urged North Korea not to demand any preconditions to inter-Korean family reunions, saying, "all political considerations must be removed."

Pyongyang rejected Seoul's call to hold a reunion of families separated by the 1950-53 Korean War, saying there can "never be any kind of humanitarian cooperation" between the two countries unless 13 North Koreans "detained" in the South are returned.

They include a group of 12 workers from a restaurant in China run by the North Korean government, whom Seoul says defected voluntarily last year. The North also wants a 13th citizen, Kim Ryon-hui, a vocal Kim Jong-un endorser here who wishes to go back home.