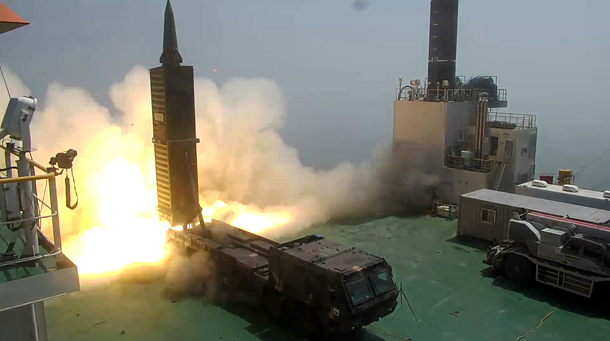 A Hyunmoo-2C missile developed by the Agency for Defense Development is launched on a mobile launcher at a test-firing site in Taean County, South Chungcheong on Friday. President Moon Jae-in was at the site observing the successful test-firing. [YONHAP]

President Moon Jae-in on Friday observed the successful test-firing of a 800-kilometer (497 miles) surface-to-surface missile known as the Hyunmoo-2C, a signal to North Korea that South Korea is not ignoring its missile threats.

The Hyunmoo-2C missile, which is still being developed, is capable of striking any intended target in the North with a range of 800 kilometers. Friday’s test, overseen by Moon at the Agency for Defense Development in Taean County, South Chungcheong, was its fourth test. After two more tests, the 800-kilometer range ballistic missile system will be deployed as a crucial part of South Korea’s so-called Kill Chain system, which is supposed to allow pre-emptive strikes on North Korea’s missile sites at times of imminent threats. All four tests including the one on Friday were successful.

If fired from the southernmost Jeju Island, a Hyunmoo-2C missile still could hit a target in the northwestern North Korean city of Sinuiju, which borders China. The Hyunmoo-2C missile system is considered to be the centerpiece of the Kill Chain system because of its capability of hitting targets throughout the North. If successful, it can reduce to ashes an area the size of a soccer field.

The South Korean military has been able to develop the indigenous 800-km missile thanks to an agreement reached between Seoul and Washington in 2012 on revising a treaty in respect to South Korea’s missile capability. After the revision of a previous agreement, South Korea was allowed to develop a missile with a range of up to 800 kilometers. Previously, the Hyunmoo-2A was the longest-range missile that South Korea was allowed by Washington. Its range is 300 kilometers.

Following the 2012 revision, Seoul completed the development and deployment of the Hyunmoo-2B, which can fly 500 kilometers. For this reason, the Hyunmoo-2C is seen as a symbol of self-defense capability among military officials. Hyunmoo means “Guardian of the Northern Sky”

Moon’s visit to the missile test site came a day after he said in an interview with Reuters that stronger international sanctions should be imposed on North Korea if it tests another nuclear weapon or intercontinental ballistic missile (ICBM) test.

Moon’s comment on Thursday and his missile test inspection are seen as an attempt to show himself as a commander in chief tough on North Korea, at the same time that he is open to dialogue.

The test came on the heels of news report that North Korea conducted a rocket engine test that appeared to be part of its ICBM missile program, according to Reuters.

Citing an anonymous U.S. official, it reported Thursday Washington time that the North appeared to have conducted the test “within the past 24 hours.”