A job board is not the solution

A job board is not the solution 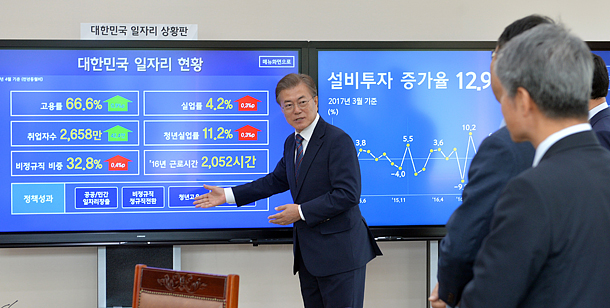 Heads of smaller districts are also watching employment, most notably the mayor of Suwon and the Yangpyeong county chief. At this rate, the board will be visible in all 17 metropolitan cities and provinces and in 226 local governments.

The central government is leading the job creation efforts, and local governments are following suit. But what comes to mind before creating new jobs is the Hyundai Heavy Industry Shipyard in Gunsan, which is to close on July 1 due to financial difficulties. Some employees will be transferred to the Ulsan headquarters, but a significant number of workers will lose jobs. Partner businesses are also in trouble.

The North Jeolla Provincial Assembly adopted a resolution calling for a government-level response to the Gunsan Shipyard shutdown on June 22. There are no specific plans to help the local economy, as partners are likely to go bankrupt and a mass layoff is expected. The provincial assembly emphasized that it is more important to save jobs than create new jobs, and the closure is expected to leave more than 5,000 people unemployed, which will affect 20,000 people including family members.

Gunsan is not the only place struggling with losing jobs, much less creating new ones. Ulsan and Geoje are experiencing mass unemployment, and the Ministry of Employment and Labor decided to extend the shipbuilding industry’s special employment support designation by one more year. The program would provide subsidies to companies to maintain employment and offers grace period on collection of late fees on health insurance premium as it is hard for the companies to maintain employment.

It is certainly better to have and maintain job situation boards. More attention will be paid to jobs, as they are in sight every day. However, the boards will be meaningless without addressing the issues in Gunsan and Ulsan. Local-level actions and efforts are limited, and there is little local governments can do on their own.

Nevertheless, regions make up an axis in job creation. The government proposed an 11.2 trillion-won supplementary budget for jobs, and is awaiting the National Assembly’s approval. Three and a half trillion won ($3.08 billion) will go to regions across the country. Local governments are competing to make job boards — let’s keep an eye on how they effectively use the budget to create and save jobs.