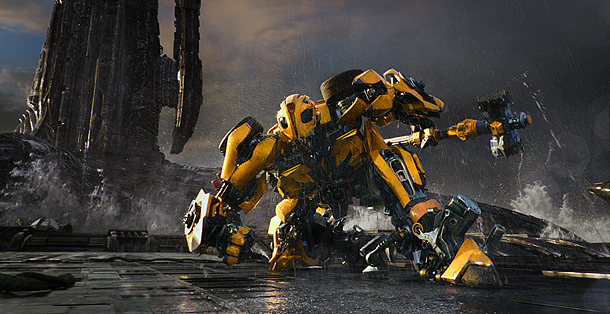 Michael Bay’s “Transformers: The Last Knight,” the fifth installment in the series, topped both local and North America’s weekend box office. Though the movie was a hit in Korea, it scored a franchise-low debut in North America. [LOTTE ENTERTAINMENT]

The hulking machines of “Transformers” may no longer be box-office behemoths in North America, but they’re still big in Korea and China.

The newest installment, starring Mark Wahlberg and Josh Duhamel, accounted for 64.1 percent of the entire ticket sales. It is a sequel to 2014’s “Transformers: Age of Extinction,” and has so far sold 1.75 million admissions since it dropped on Wednesday. It is a bigger opening than Universal Pictures’ “The Mummy,” which sold 1.13 million tickets in its first weekend earlier this month.

Although the second “Transformers” movie to star Wahlberg also topped North American box office, it scored a franchise-low debut with an estimated $43.5 million in ticket sales over the weekend and a five-day total of $69.1 million since opening Wednesday. All previous “Transformers” sequels opened with $97 million-plus in sales.

Other than Korea, the newest Transformers chapter showed its might elsewhere, especially in China. It took in $196.2 million outside of North America over the weekend, including an impressive $123.4 million in China.

Future business will tell whether those grosses are enough to cover a hugely expensive movie: $217 million to make, plus nearly as much to market. Studios reap a smaller percentage of ticket sales from Chinese theaters. And reviews - though never much of a factor in “Transformers” land - were worse for “The Last Knight” than the earlier films. Audiences gave this one a B-plus CinemaScore.

Yet “Transformers” has been increasingly skewing international. The previous film, 2014’s “Age of Extinction,” made $858.6 million of its $1.1 billion global haul abroad.

“Transformers’ is built for a global audience,” said Kyle Davies, president of distribution for Paramount. “You really have to consider how we did in the overall and it was really strong overseas and in China. That’s how we treat ‘Transformers’: It’s a global property. So we’re hopeful that we’re going to get to a good place.”

Local thriller “A Day” came in at a distant second in its second weekend with 226,000 admissions, adding to a total of 989,000. The film, a time-loop thriller revolving around two men who continue to return to a specific time to witness the death of their loved ones, only managed to account for 11.2 percent of the weekend sales.

Universal Pictures’ “The Mummy,” dropped two spots in its third weekend to land at third with 162,000 admissions sold. The local action-packed movie “The Villainess,” starring female assassin played by Kim Ok-bin, ranked at fourth with 95,000 admissions.

“The Circle,” a thriller based on the 2013 novel of the same title, rounded out the top five in its debut weekend with 39,000 admissions sold. Starring Emma Watson and Tom Hanks, the James Ponsoldt-directed film revolves around a woman who lands a job at a powerful tech company named the Circle and deals with themes including surveillance and freedom.

In North America, “Wonder Woman” and “Cars 3” tied for second place, both with $25.2 million. Nearly a month after opening, Patty Jenkins’ “Wonder Woman” continues to be a major draw. In four weeks, it has surpassed $300 million domestically. And at $652.9 million globally, it’s the highest grossing film directed by a woman, not accounting for inflation.