Blue House says alliance will be reinforced by two leaders

Blue House says alliance will be reinforced by two leaders 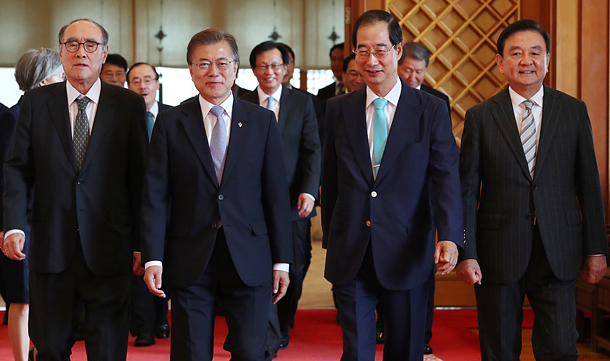 President Moon Jae-in invites former ambassadors to the United States to a luncheon meeting on Monday in the Blue House to seek their insight and advice before he visits Washington for his first summit with U.S. President Donald Trump. From left; former Prime Minister Lee Hong-koo, Moon, former Prime Minister Han Duck-soo, and Hong Seok-hyun, chairman of the Korean Peninsula Forum. [YONHAP]

Building friendship and trust with U.S. President Donald Trump, reaffirming the shared vision of the Korea-U.S. alliance and finding a joint resolution to North Korea’s nuclear and missile threats are the top priorities for President Moon Jae-in’s trip to the United States, the Blue House said Monday.

“We hope the trip will be an opportunity for the two leaders to build friendship and trust in order to establish a close consultation system for the next five years for frequent phone conversations, presidential visits to each other’s country and multilateral meetings,” said Chung Eui-yong, head of the National Security Office of the presidential office. “Based on such a close consultation system, we want to have specific discussions on policies in the future.”

Moon will leave for Washington on Wednesday and meet with Trump on Thursday and Friday at the White House. It is Moon’s first overseas trip since he took office on May 10, 2017.

The Blue House took pains to dismiss advance concerns about disharmony between the two leaders, who have presented different approaches toward North Korea and the bilateral alliance. Moon and Trump are expected to have a candid discussion to resolve the North’s growing nuclear and missile threats, Chung said.

The Blue House also expressed its desire to bolster the 64-year-old military alliance and expand it. “We expect the United States to reaffirm that its commitment to the defense and security of South Korea, including extended deterrence, is unwavering,” Chung said. “We also expect to share and reaffirm visions to develop the alliance through cooperation in various areas.”

Moon’s itinerary in Washington is also focused on celebrating and bolstering the alliance. He will arrive in Washington on Wednesday and start the trip with a visit to a new monument to mark one of the fiercest battles in the Korean War. He will lay flowers at the Chosin Few Battle Monument at the National Museum of the Marine Corps in Virginia.

“The Battle of Chosin Reservoir [in 1950] allowed 90,000 refugees to evacuate and it is known as the evacuation of Hungnam,” Chung said. “The parents of President Moon were among the refugees. Laying flowers at the monument is symbolic as it emphasizes the importance of the Korea-U.S. alliance and also highlights the president’s family history.”

Moon will also attend a business roundtable hosted by the chambers of commerce of the two countries and give a speech later on Wednesday.

On Thursday, Moon will have meetings with the leaderships of the Senate and the House to exchange opinions on plans to bolster the alliance. Later in the evening, Moon and his wife, Kim Jung-sook, will visit the White House at the invitation of the U.S. president and the first lady. It will be the first meeting of the two leaders and a welcome dinner will follow.

Moon will visit the Korean War Veterans Memorial with U.S. Vice President Mike Pence. “It is a significant event to showcase the strength of the Korea-U.S. alliance, forged in blood,” Chung said. “Pence’s late father served during the Korean War, and he strongly expressed his wish to lay flowers with our president.”

Later on Friday, Moon will have a summit with Trump.

The two leaders will have a joint media session to announce a joint statement and the outcome of their meeting. The presidents will not take questions from reporters. Both leaders will express their thoughts about the summit to reporters.

Moon will wrap up his White House schedule with a luncheon with Pence. In the evening, Moon will give a speech at the Center for Strategic and International Studies to explain his government’s foreign and security policy. The president will meet with Korean residents in the United States on Saturday and return to Korea.

“I won’t be obsessed with achieving fruitful outcomes on specific issues at the upcoming summit,” Moon was quoted as saying at the meeting by his spokesman, Park Soo-hyun. “I have an anticipation to build friendship and trust with President Trump, solidify the basis to reinforce the Korea-U.S. alliance and discuss joint measures to resolve the North Korean nuclear issue.”

The former ambassadors reportedly told Moon that his itinerary for the Washington visit is well planned to showcase the importance of the alliance, Park said. “It is desirable for the two leaders to highlight the significance and meaning of the alliance to strengthen the basis of bilateral cooperation, instead of having discussions on specific pending issues,” Park quoted one of the former ambassadors as recommending Moon. On Friday, Moon also met with Lim Dong-won, who served as head of the National Intelligence Service and Unification Ministry in the Kim Dae-jung administration, and Moon Chung-in, a professor of Yonsei University and special advisor on national security.

“Lim prepared for two Korea-U.S. summits during the Kim administration and he has both experiences of success and failure [of the summits],” a Blue House source told the JoongAng Ilbo. “The special advisor visited the United States most recently and has the most accurate understanding of the current mood, so the president needed to meet him.”

The professor recently stirred controversy with remarks at a forum in Washington, although the Blue House made clear that they were his personal opinions, not an official stance of the president.

If North Korea suspends nuclear and missile activities, the special advisor said, South Korea could consult with the United States to scale down joint military exercises and reduce deployment of U.S. strategic weapons to the South. He also dismissed concerns that an environmental probe ordered by Seoul on the U.S. deployment of the Terminal High Altitude Area Defense antimissile system in Korea will harm the bilateral relations. “If the Korea-U.S. alliance is ruptured by the issue,” he said, “that’s not an alliance.”