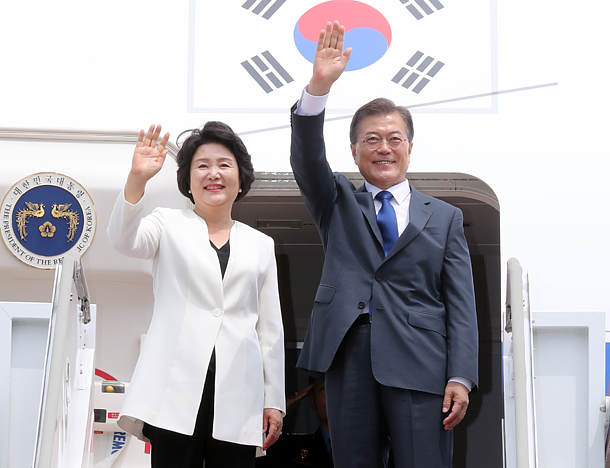 President Moon Jae-in and First Lady Kim Jung-sook wave before boarding the presidential plane for Washington on Wednesday at Seoul Air Base in Seongnam, Gyeonggi. [YONHAP]

President Moon Jae-in on Wednesday embarked on his first overseas trip since taking office for a summit with U.S. President Donald Trump in Washington, with several important issues to discuss, especially how to rein in North Korea’s nuclear ambition.

Moon left the country from Seoul Air Base in Seongnam, Gyeonggi, at around 2 p.m. and was expected to arrive in the U.S. capital on Wednesday afternoon local time.

In a departure from past presidential trips - in which presidents were seen off by a large number of cabinet officials and politicians - only a handful of people were at the airport, including presidential chief of staff Im Jong-seok and Acting U.S. Ambassador to Korea Marc Knapper. The scaled-down bon voyage was requested by Moon himself.

Among those accompanying the president on his five-day trip to Washington were 52 businesspeople including Chung Eui-sun, vice chairman of Hyundai Motor Group, Chey Tae-won, SK Group chief and Huh Chang-soo, GS Group chairman. The business delegation is expected to present an investment plan worth 7 trillion won ($6.12 billion) in the U.S. during Moon’s official working visit.

Moon and Trump will try to reach some kind of agreement on how to deal with Pyongyang’s pursuit of nuclear weapons and a missile that could hit the continental U.S. The two leaders will also discuss the deployment of the U.S.-operated missile shield program known as the Terminal High Altitude Area Defense (Thaad) system in Korea. Moon has delayed its full deployment calling for an environmental impact study, which Washington is not pleased about.

Upon landing in the U.S., Moon is scheduled to visit a memorial at the National Museum of the Marine Corps in Quantico, Virginia, commemorating the Battle of Chosin Reservoir at the height of the 1950-53 Korean War, which is remembered as a high point in the history of the U.S. Marines Corps as well as one of the fiercest battles the UN coalition forces waged during the three-year conflict.

It is estimated that the U.S. Marines Corps lost more than 800 men while the U.S. Army suffered from over 2,000 losses. On the other side, an estimated 35,000 Chinese troops died in the fighting in freezing temperatures.

It was thanks to the Chosin Reservoir Battle, which lasted from November 26 to December 11, 1950, that the U.S.-led coalition delayed the military advancement of North Korean and Chinese troops down the Korean Peninsula. The delay enabled tens of thousands of North Koreans seeking freedom to evacuate from Hungnam Port aboard U.S. naval ships. President Moon’s parents and his older sister were among them. Moon was born two years later in the South.

Moon will have dinner at the White House on Thursday night and his summit with Trump is on Friday, 51 days after taking office. It is the fastest one-on-one meeting between a Korean president and his or her U.S. counterpart. Moon will return home on late Sunday Seoul time.