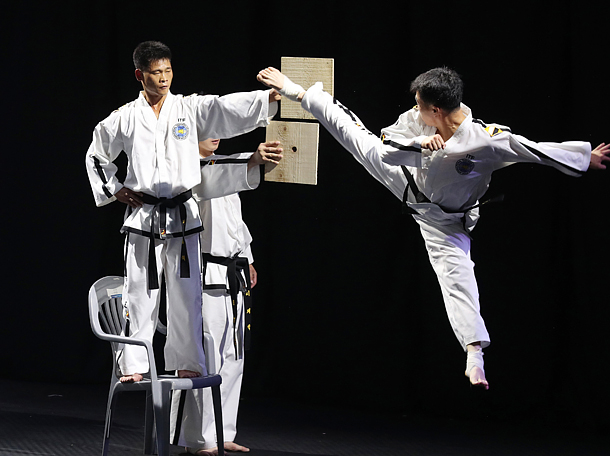 Chang, who formerly headed the ITF, is the only North Korean national on the International Olympic Committee (IOC).

“It’s easier to cooperate in sports when the political environment is favorable,” he told local reporters Tuesday at a dinner reception hosted by the Global Taekwondo Support Foundation for Peace and Unification. “Sports can be a catalyst” for improving inter-Korean ties, “but cannot be the foundation or base.”

Asked about the prospects of forming a joint Korean team in the upcoming PyeongChang Winter Olympics, another proposition made by Moon on Saturday, Chang said the “decision isn’t up to us” and that he “will have to talk about it with the head of the IOC.”

“It’s tragic, but [South Korea] keeps trying to achieve something through sports, and it just doesn’t work that way,” the North Korean official said, adding that previous attempts at forming a joint team in the 1991 World Table Tennis Championships in Chiba, Japan or when both nations made a joint entrance in the 2000 Sydney Summer Olympics “didn’t lead to anything.” The events “are simply something to be marked in the history of sports,” Chang said. “It never led to unification.”

Chang’s statements were in response to Moon’s speech on Saturday at the opening ceremony of the World Taekwondo Championships in Muju County, North Jeolla, in which he renewed calls for warmer ties with Pyongyang, inviting the country to participate in the PyeongChang Winter Olympics early next year to “fulfill the Olympic spirit of harmony and promote world peace.”

While welcoming the North Korean Taekwondo team to South Korea, Moon said he was “delighted” to have accomplished the first inter-Korean sports cooperation of his administration, adding that he hopes the ITF and World Taekwondo will help bring peace to the Korean Peninsula.

Moon, while keeping silent on the North’s weapons program, suggested the two Koreas form a united team in the upcoming Olympics and walk side by side during the opening ceremony. North Korea’s cheerleading squad was also invited.

Chang did not specify during his visit how the two Koreas could work out their political conflict, but North Korea’s state-run newspaper, Rodong Sinmun, said in an editorial on Sunday that it was “foolish” for Moon to make North Korean denuclearization a prerequisite for improving relations.

The article urged South Korea to distance itself from the United States if it truly wants to improve ties.