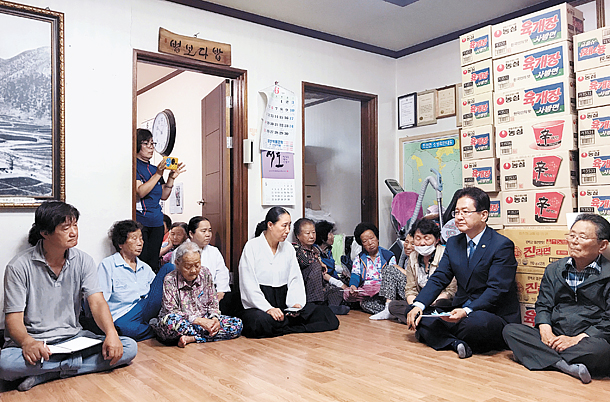 Vice Defense Minister Suh Choo-suk, second from right, speaks with a group of some 30 residents about their concerns regarding the Thaad deployment at the Soseong-ri town hall in Seongju County, North Gyeongsang, near the golf course where the antimissile system is partially installed. [YONHAP]

Suh sought out Seongju residents on Tuesday at the Soseong-ri town hall, near the former golf course where the U.S. Forces Korea’s Thaad battery is partially deployed. Some have interpreted his remarks as suggesting that the government plans to conduct a full environmental impact appraisal, which would take at least one year, as opposed to a smaller study.

Under the Environmental Impact Assessment Act, a small-scale appraisal does not require gathering input from residents and can take under six months to complete.

Seongju residents and Won Buddhists have been protesting the deployment, especially the stealthy, expedited manner in which it was moved to the golf course in late April under the previous government without a proper environmental appraisal.

President Moon Jae-in ordered an appraisal at the beginning of the month, after the previous government failed to complete one before installing key components of the battery, including a powerful radar system and two missile launchers, on April 26.

But Suh says his remarks should not be overanalyzed. He told the JoongAng Ilbo over the phone Tuesday that he only “spoke of the principle [of including the residents’ input]” and that “there was no concrete method” yet.

“The residents are most concerned about including a delegation while measuring electromagnetic waves,” he said.

The vice minister elaborated that he thus emphasized to them the principle of guaranteeing their participation, and that the Ministry of National Defense is reviewing how to do so. But he said it not official that the assessment will be undertaken.

Suh is overseeing the deployment task force, along with the Defense Ministry’s environmental impact study process.

Earlier that morning, a group of residents protesting the deployment had gathered in front of the Soseong-ri town hall. When Suh arrived there around 9:30 a.m., residents thanked him for coming, while the vice minister replied, “I hope to speak more closely with residents in the future.”

Suh’s meeting with Seongju residents was conducted behind closed doors, upon their request. They talked for 90 minutes, and a committee of Seongju residents protesting Thaad explained afterward in a statement that Suh had “apologized for the worry caused by the unilateral deployment of Thaad under the previous government.”

The Defense Ministry said in a statement that Suh gathered the opinions of residents, but added that the government’s position is that the deployment is to “counter North Korean nuclear and missile threats and is a South Korea-U.S. alliance decision.”

It also added that Suh explained this position and requested that the residents cooperate on this. He also asked them to stop their blockade of the road leading to the Thaad site.