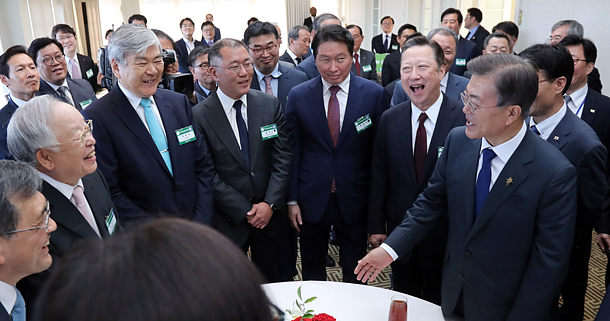 Korean companies promised to invest $12.8 billion in the U.S. over the next five years.

The announcement on Thursday was made by the 49 Korean businesses - including Samsung Electronics and Hyundai Motor - that have traveled with President Moon Jae-in on his first trip to Washington since taking office in May.

It is seen as a move to ease rising pressure from the U.S. government against Korean exported goods including the possibility of the renegotiation or termination of the Korea-U.S. Free Trade Agreement.

According to the Korea Chamber of Commerce and Industry, which was responsible for selecting the companies that traveled with Moon, the investment will include building production plants and expanding manufacturing facilities in the U.S., investing in research and development of future technologies and mergers and acquisitions with U.S. companies.

Additionally, Korea will be spending $22.4 billion over the next five years on American goods including airplanes and energy products such as liquefied natural gas.

Samsung Electronics was the first Korean company to announce a plan to invest $380 million in building an electronic home appliance factory in South Carolina on Wednesday. If completed it will be the Korean tech giant’s first home appliance plant in the U.S.

The plant, which will produce washing machines as early as next year, is expected to create 950 jobs.

Samsung is also planning to invest $1.5 billion to build a semiconductor parts manufacturing plant in Austin, Texas, by 2020.

LG Electronics is planning to invest $250 million on a home appliance factory in Tennessee that will produce 1 million washing machines annually starting 2019. Additionally the Korean electronics company will be investing $300 million in a new office building in New Jersey.

Hyundai Motor will be investing $3.1 billion over the next five years through its affiliates in the development of new technologies including eco-friendly autonomous vehicles.

SK plans to invest $4.4 billion in the energy sector. The company has signed a cooperation agreement with GE where it will be investing in continental resources and the excavation and production of shale gas.

Doosan Group will invest $790 million in expanding its U.S. plant as well as on research and development of next generation goods like fuel cells.

CJ Group will be spending over $1 billion on building a new pharmaceutical plant as well as mergers and the acquisition of local companies.

Earlier this year Samsung and LG were slapped with heavier duties on charges of dumping the prices of washing machines that were manufactured in China.

In February Trump tweeted “Thank you, @samsung! We would love to have you!” despite Samsung having not confirmed investment plans in the U.S. at the time.