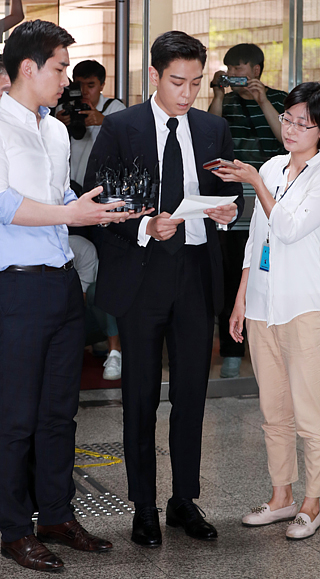 The prosecution demanded ten months of imprisonment with two years of probation for rapper T.O.P, who is currently under investigation for marijuana use, in the first trial held yesterday.

T.O.P’s trial was held at the Seoul Central District Court.

When the prosecution announced the charges, the rapper and his attorney said, “We concede to all charges.”

At the trial, the prosecution produced on-site photographs as evidence and the results of its investigation, while the rapper’s side produced no further evidence. T.O.P will serve no prison time unless he commits a crime during the two-year probationary period.

The rapper also read an apology in front of reporters, tin which he said, “I sincerely apologize to anyone who has been shocked and hurt by my actions. I am very ashamed of myself and regret my actions.”

T.O.P was subject to a hair follicle test in April after the narcotics unit of the Seoul Metropolitan Police Agency was informed in March that the rapper had smoked marijuana. The rapper was indicted after the results were positive earlier this month.

During police investigations, which began in April, he said he never smoked marijuana, but later altered his answer to say that he did smoke twice. He still denied smoking it in liquid form at the time. He went back again on his word yesterday as he admitted to all charges presented by the prosecution.

His smoking partner, surnamed Han, whose trial was held on June 16, was sentenced to four years of probation.