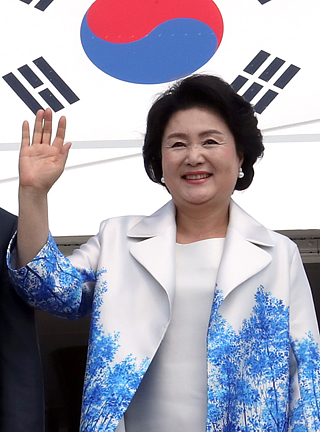 Kim Jung-sook disembarks from the presidential plane in Washington on Wednesday. [YONHAP]

The soft diplomacy of Korea’s first lady, Kim Jung-sook, will be put to the test as she accompanies President Moon Jae-in on his first overseas trip since assuming office last month.

Kim, a former member of the Seoul Metropolitan Chorus, has managed to gain a strong fan base here among Moon’s endorsers, who address her as “Cheerful Ms. Jung-sook” due to her hearty laugh and bright demeanor.

The anecdote about how she and Moon married is now well known. Moon told a local broadcaster earlier this year that he was hanging out with his friends one day when Kim approached him and asked, “Jae-in, are you going to marry me or not? Tell me!” Moon said he was startled and replied, “Alright.”

Both Kyung Hee University graduates, Moon and Kim met at a festival on campus through a mutual friend.

The Blue House said in a statement that Kim was planning to participate in an art therapy session at a senior service center during her trip to the United States, highlighting the first lady’s keen interest in senior welfare issues and social facilities for patients with Alzheimer’s disease.

Her official schedule includes a state dinner with Moon hosted by U.S. President Donald Trump and Melania Trump, and later lunch with Karen Pence, the second lady. Kim is also expected to have tea with a women’s group of Koreans and Americans, which will serve as a chance to “ruminate over the significance of South Korea-U.S. friendship and trust,” the Blue House said.

At dinner with the Trumps, South Korea’s presidential office said Kim will be wearing traditional hanbok made of fabrics she received from her mother as a wedding gift, to “revitalize the domestic hanbok market at a time when the traditional attire has lost its standing in everyday life.”

Kim’s mother ran a hanbok fabric store at the Gwangjang Market in Jongno District, central Seoul, for decades before shutting down the business due to withering demand.

Kim, who boarded the presidential airplane in Korea on Wednesday donning a v-necked black top, pants and white suit jacket, landed in Washington the following day and came out wearing a plain white dress and a long-sleeved white overcoat with trees imprinted in blue.

The Blue House said that the blue signified “comfort, trust, success and hope,” adding that the first lady will be wearing a lot of the hue to convey the message of a “successful first South Korea-U.S. summit based on mutual trust.”