Moon affirms alliance with U.S. at start of his visit

Moon affirms alliance with U.S. at start of his visit 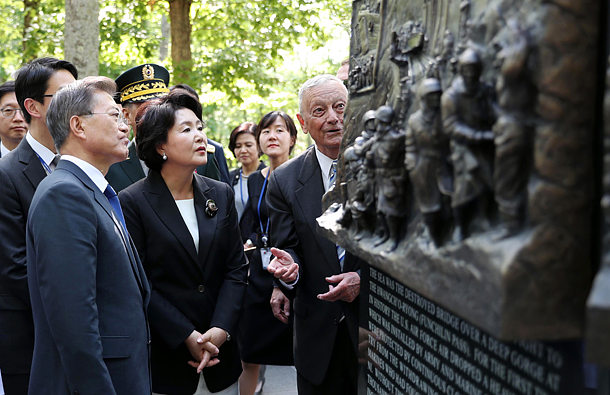 WASHINGTON - President Moon Jae-in began a four-day visit to the United States Wednesday with an emotional tribute at a Korean War memorial to highlight his commitment to the Korea-U.S. alliance and to working with U.S. President Donald Trump to deal with threats from North Korea.

Moon, elected last month, arrived here Wednesday for his first overseas presidential trip. He is scheduled to meet with Trump for dinner on Thursday and a meeting on Friday to address security and economic issues common to the two countries, including the North’s rapidly intensifying nuclear and missile threats.

Shortly upon their arrival, Moon and his wife Kim Jung-sook headed to the Chosin Few Battle Monument at the National Museum of the Marine Corps in Virginia to commemorate one of the fiercest battles of the Korean War. The Jangjin Lake Campaign in 1950 allowed the mass evacuation of Hungnam, and Moon’s parents were among the refugees.

In a speech delivered at the memorial, Moon said he would not be here today without the American sacrifices, referring to his family history. Offering gratitude and respect to the veterans of the Korean War, particularly the heroes of that battle, Moon stressed his commitment to the Korea-U.S. alliance.

“This is how the Korea-U.S. alliance came to be, forged in blood in the fires of the battlefield. This alliance was not made by signing sheets of paper. And as this was in the case of my life, this alliance is closely linked to each and every citizen of both of our countries,” Moon said. “This is why I do not doubt the future of our alliance. The Korea-U.S. alliance will continue to grow to an even greater and even stronger alliance.”

Referring to President Trump, Moon continued, “On the foundation of our great Korea-U.S. alliance, together we will achieve the dismantlement of North Korea’s nuclear program, peace on the Korean Peninsula and eventually peace in Northeast Asia.”

Moon, a human rights lawyer-turned-politician who promotes an engagement policy toward North Korea, ended his conservative predecessors’ nine years of hard-line approaches to Pyongyang. Shortly after his election, he proposed dialogue with the North, fueling concerns that his policy may rupture the decades-old alliance with the United States in the face of the North’s intensifying nuclear and missile threats.

The emotional tribute at the memorial was meant to underscore the liberal president’s commitment to the alliance ahead of his summit with Trump. After the presidential summit on Friday, a joint media session will be held to announce the outcome of the summit.

On his way to Washington, Moon revealed his plan to resolve the security crisis prompted by North Korea’s nuclear arms programs. In a meeting with reporters on the presidential plane, Moon explained a two-stage process aimed at ultimately dismantling the nuclear programs.

Moon said the summit could address compensation to be offered to the North in return for starting a dialogue and a subsequent verification process of nuclear dismantlement.

“A nuclear freeze by the North is the entry to a dialogue,” Moon said. “And the exit of the dialogue is a complete dismantlement. With the nuclear dismantlement, a peace system will be established on the peninsula.”

The process won’t be easy, Moon admitted. “We have to start talks with the North, and the minimum conditions I believe will be the North’s promise to stop additional nuclear and missile provocations and to freeze its nuclear program,” he said. “Only then, can we have a full-scale talk about nuclear dismantlement.”

One of Moon’s advisers visiting Washington and New York earlier this month, Moon Chung-in, a professor at Yonsei University, suggested that if North Korea suspends it nuclear and missile activities, the South could consult with the United States to scale down joint military exercises and reduce deployment of U.S. strategic weapons to the South.

On the plane, Moon clarified that proposal.

“It was an opinion [from him] as an academic, not as the special adviser,” Moon said. “The official stance Seoul and Washington have so far is that the nuclear freeze of the North and the Korea-U.S. joint military exercise are not linked and it remains unchanged.”

Moon said it was undesirable to react too sensitively to the professor’s opinion, fearing that it may be different from Washington’s position. He said discussions must take place freely to explore options, and the two countries need to talk closely if the upcoming summit could serve as an opportunity to find a resolution to the nuclear crisis.

Admitting that the U.S. military’s deployment of a powerful antimissile system in Korea is a thorny issue due to China’s objections, Moon said finding a solution that would satisfy both Beijing and Washington is Seoul’s challenge.

A White House official said Wednesday that the Thaad issue won’t be a major point of conversation between the two leaders at the summit, adding that Moon and his foreign minister have been very clear in recent days that they did not aim to reverse the deployment decision.

Should the issue come up, it will do so as “a routine matter of housekeeping in the bilateral relationship,” he said. “I must come back with a success,” Moon said about the summit. “This summit is significant because it aims to end the vacuum in presidential diplomacy, bolster the bilateral alliance and find a coordinated measure against the North’s nuclear and missile provocations. I believe it will go well.”