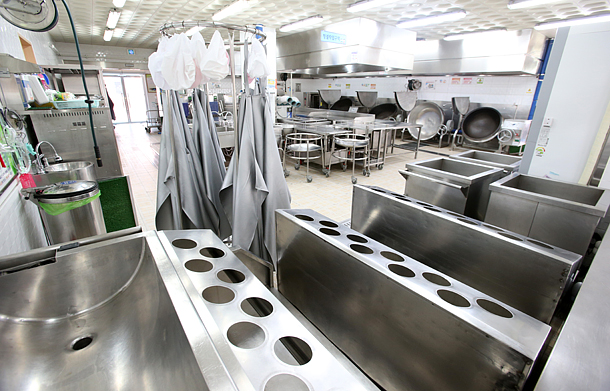 A kitchen for a school cafeteria in Chuncheon, Gangwon, is vacant on Thursday as cafeteria workers went on a general strike. [YONHAP]

Some 14,200 cafeteria workers of public elementary, middle and high schools throughout the country went on a two-day strike from Thursday demanding a raise in their pay and transformation of all limited contracts to unlimited contracts, forcing nearly 2,000 school cafeterias out of service.

“Counting all employees of schools going on the strike, including cooks, cooking assistants, librarians and administration officers, nearly 30,000 are estimated to be on the strike together,” said Min Tae-ho, secretary-general of the school contract workers union of the Korean Confederation of Trade Unions (KCTU).

The cafeteria workers’ strike shut down 1,926 cafeterias of public schools on Thursday. Of these, 598 schools asked parents to pack lunch for their kids, 1,057 served milk and bread instead, and 157 did not hold classes beyond lunch. The other 114 decided to hold outdoors classes and activities for the day.

There are some 370,000 contract workers in some 6,000 elementary, middle and high schools throughout the country, according to the Ministry of Education.

The contract workers make up 41 percent of the working force at schools.

Nearly half of these contract workers in schools are teachers in English, sports and after-school programs. There are about 47,700 cooks and about 13,300 cooking assistants.

These contract workers are hired on various contracts, from part-time contracts requiring service of 15 hours a week to unlimited contracts.

Unlimited contract employment is not equal to salaried employment in its working conditions and compensations.

The unions have informed the Seoul Metropolitan Office of Education and other local education offices of their strike in advance, and education offices sent out notices to parents earlier this week asking them to pack lunches for their children, or informing them that the schools will be serving bread and milk, or only hold classes in the mornings during the two-day strike.

A 33-year-old mother of two children, surnamed Yang, handed off a lunch bag to her daughter in front of her classroom at an elementary school in Seocho District, southern Seoul, on Thursday morning.

“They said three cafeteria workers went on a strike here so they couldn’t prepare lunches for the students,” Yang said. “I understand the difficult working conditions of these employees at schools, but I don’t think they should stop serving kids food. I had to pack two lunches out of nowhere today.”

“I have to leave for work at 5 a.m. every day - how can I prepare lunches for my two children?” said a resident of Incheon.

“I can’t understand these workers going on strike at the expense of students’ welfare.”

Some parents supported the cause of the contract workers.

“My daughter packed her own lunch from early in the morning,” said another parent. “I am very proud of her. I hope these contract workers get their points across.”